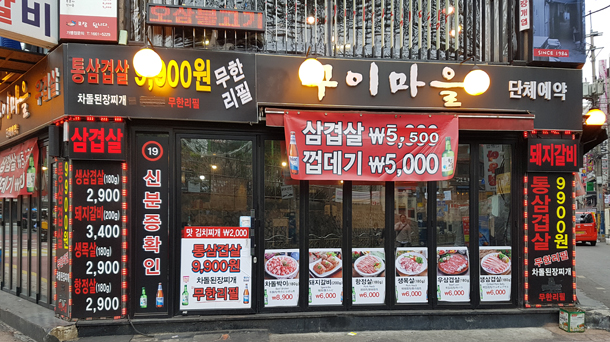 A sluggish economy has more diners tightening their purse strings but certainly not their belts. Among the money-conscious, all-you-can-eat restaurants that offer unlimited food at a low price have become a popular economical option.

“It’s nice to be able to eat as much as I want,” said Cho Hyun-jun, a 22-year-old college student. “I enjoy both eating and the idea of being able to eat without limitation.”

Like a buffet, all-you-can-eat joints offer an unlimited amount of self-served food. The big difference is that while most buffets have a variety of dishes to choose from, all-you-can-eat restaurants typically focus on one dish. Samgyeopsal (pork belly), sushi, lamb skewers, tteokbokki (spicy rice cake), budae jjigae (spam stew) and gopchang (beef tripe) are common examples.

“My friends and I are all big eaters, so we think it’s much more economical to go an all-you-can-eat than a regular restaurant,” said Lee Seung-soo, a 23-year-old college student who recently visited a samgyeopsal all-you-can-eat. “It costs more to order the same amount [at other restaurants] but the quality isn’t that much different. At an ordinary restaurant, it usually costs 10,000 won [$8.50] for 200 grams [7 ounces], but I eat double, sometimes triple that amount for the same price at an all-you-can-eat.”

The restaurants are popular among the younger set, particularly college students on a limited budget. The unemployment rate among those aged 19 to 29 reached a record 9.4 percent this year, and it’s expected to get worse. A recent report by the Korea Labor Institute forecast the overall unemployment rate next year to reach its highest since 2001, an estimated 3.9 percent, 0.2 percentage points higher than this year. The slow economy has hit millennials especially hard, making all-you-can-eat options more attractive.

Among the most popular are samgyeopsal restaurants. In the university neighborhood of Sinchon in western Seoul, there are over 10 samgyeopsal all-you-can-eats. Many others offer gopchang, tteokbokki, budae jjigae, shabu shabu, pizza and roasted ribs - and all of them are always full of people queuing up on the weekends.

But while happy eaters might be glad to pay less for more, many restaurant owners are biting the bullet to keep up with the high demand. “They’re struggling to make a profit,” said Kim Sang-hoon, head of the business consulting firm Start Business.

As more all-you-can-eat joints open up, the increased demand for raw ingredients raises their prices. So even though the restaurants might see more customers, the owners have to spend more than half their revenue on buying ingredients to keep up, according to Kim. “Quite often, they’re left with only 10 percent of the sales as profit,” the consultant said, while most restaurants in Korea make margins of 25 to 35 percent. “In the long run, they just can’t survive.”

The crowded market has had the effect of spreading out customers and reducing margins. “More choice means higher expectations, and higher expectations lead to bigger disappointment,” Kim explained. “Restaurant owners just won’t be able to keep up [with the cost and expectations].”

The samgyeopsal restaurant owner recalled that a kilogram of pork belly cost 4,800 won in March, but that it has since nearly doubled to 9,000 won. To keep up, the owner raised his all-you-can-eat price in October from 9,900 won to 10,900 won, but he still wasn’t able to make enough to cover costs. If anything, the owner said customers simply went to competitors that were selling meat at his previous price.

When he added a new 9,900 won menu in November to try and bring back some of his old customers, the numbers barely recovered. After subtracting costs from rent, wages and ingredients, what was left in his pocket was a mere fraction of what he had initially hoped for. “I’ll probably have to close soon before I lose my investment,” the owner lamented.

The business prospects might be poor, but all-you-can-eat restaurants are not going away any time soon. The concept’s high popularity will always lure in new entrants. On top of that, all-you-can-eat franchises often publicize just the annual sales of restaurants, rather than the profit, making it seem as though owning an all-you-can-eat has great market potential.

“The current model for all-you-can-eat restaurants is not sustainable, so it’s best for owners to move to a different business after a certain period of time,” said Im Kun-shin, a business professor at Yonsei University. “There are two options. You can change the menu to something unique, for example from samgyeopsal to roasted clams. By providing differentiated service, you can draw customers to your shop.

“Or, if you provide more than one menu, the reliance on a single ingredient decreases, and the ingredient supplier’s bargaining power also weakens. That way, you can change the business without closing down.”