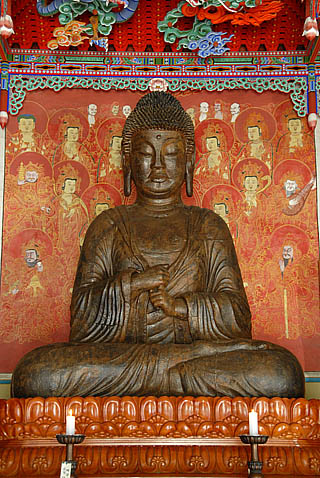 Enshrined at Daejeokgwangjeon Hall of Borimsa Temple in Yuchi-myeon, Jangheung County, South Jeolla, this iron cast Buddha statue has an inscription stating that it was produced in 858 in Unified Silla (668-935) during the reign of King Heonan.

The statue has lost its original pedestal and mandorla (halo of light) but has a clear record of its background that says it was commissioned by a local government official named Kim Su-jong who served the administration of Muju and Jangsa (today’s Gwangju and Jangheung).

The Buddha features an oval, plump face with high-ridged, sharp nose and firmly sealed mouth as well as conch-shaped curls covering the head, which, together, help create a dignified look.

Comparing the Buddha statues of Unified Silla in the 8th century, this iron statue lacks dynamism and intensity in its details.

Art historians agree that the statue provides a fine example of an artistic tendency of Silla in the 9th century when its Buddhist statues began to lose their vitality.

The Buddha’s symbolic hand gesture suggests that he is Vairocana, the Buddha of All Pervading Light.

The statue is highly regarded in the history of Korean Buddhist art not just because it provides important information on the genealogy of Vairocana Buddha images in Korea with its date of production clearly known; it is also the earliest existing iron cast Buddhist statue, which were popular in Korea in the period between late Unified Silla and early Goryeo Dynasty (918-1392).

Gucci says the fashion show will go on at Gyeongbok Palace