Using color to examine Korean values and history : New exhibit looks at the symbolic meaning of objects used in the past

Using color to examine Korean values and history : New exhibit looks at the symbolic meaning of objects used in the past 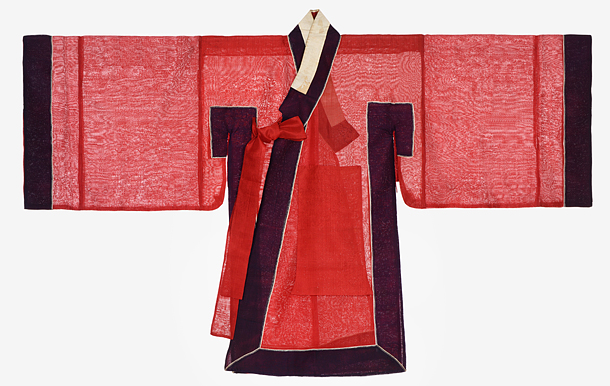 A robe from the 1910s (Important Folklore Cultural Heritage No. 241) shows a sophisticated color palette, defying the notion of the “clad-in-white” Koreans. [NATIONAL FOLK MUSEUM OF KOREA]

“Everywhere you look, it’s colors. The skies and the earth. People and objects. Nature has its hues. Clothes and bowls are painted in colors. Why is it then that different periods worship different colors?”

This quote from an essay by Yun Ki (1741-1826), a government official and scholar from the late Joseon Dynasty (1392-1910) aroused the curiosity of researchers at the National Folk Museum of Korea.

Koreans were often described as “the people clad in white” according to accounts of foreigners who began entering Korea in the late 19th century.

Although it’s a historical fact that Koreans did often wear white throughout its history, it doesn’t mean that there weren’t any colors in their lives.

An exhibition that opened recently at the museum, located in the eastern part of the Gyeongbok Palace grounds, looks at the colors found in Korean people’s lives throughout history, how they were used and what they meant.

“There are various academic theories as to why Koreans have generally worn white. One theory is that white was often associated with the sun and good luck,” he told reporters in a press event held on Tuesday, when asked about why Koreans are described as “people clad in white” in ancient documents.

“But we found various colors closely connected to people’s lives and their meaning and symbols changed throughout time. And we sought to show that through traditional artifacts.” 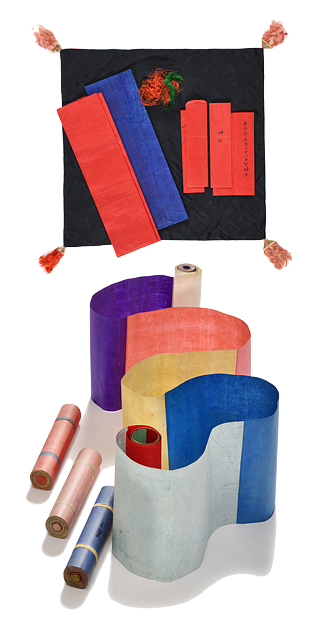 Top: Fabric and paper in which a bride and groom’s fortune are written (1939). Bottom: Letter papers from late Joseon Dynasty (1392-1910). [NATIONAL FOLK MUSEUM OF KOREA]

Unsurprisingly, the first part of the exhibition is about white.

Outside of the white room, there is the room for black, which stood for two different meanings.

“During Joseon, black stood for class and dignity as can be seen from government official’s hats and clothing,” Hwang Kyung-seon, the museum’s researcher who curated the exhibition, said. “But during the Japanese colonization of Korea (1910-45), Koreans were forced to wear black or other colored clothes and so black in this era represented control and oppression.”

In the section about red, a red certificate confirming one’s passing of the civil service exam is one of the most startling artifacts. Red generally stood for wishing for blessing and warding off evil, but as can be seen from the 1885-certificate, it also stood for dignity. After the Korean War (1950-53) the color represented Communism and therefore was shunned by the people.

Still, blue appears to have been Koreans’ favorite, researchers say. “Blue from ancient Korea symbolized the ideal world of nature,” Hwang said. “Things like mountains and the sea, the skies and the greenery and their hues that range from green to navy were all seen as blue.”

Yellow on the other hand was reserved for the royals, particularly during the Korean Empire (1897-1910) era, otherwise known as the Daehan Empire period, which was the later years of the Joseon Dynasty. That’s why in this section, artifacts of the royal court of Joseon are on display. 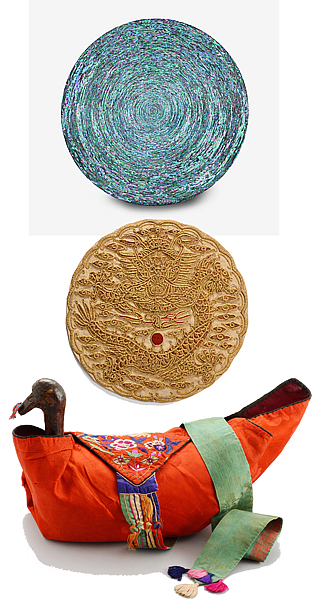 Top: “Rainbow” by artist Kim You-sun. Middle: A piece of fabric made of gold thread that used to decorate the robe of Emperor Gojong (1852-1919). Bottom: A duck and its wrapping that a groom sent to the bride’s house in a traditional Korean wedding. [NATIONAL FOLK MUSEUM OF KOREA]

The exhibition also shows how Korea mixed and matched colors.

Traditionally, Korea believed in the balance of yin and yang as well as the harmony of Ohaeng, or the Five Elements (namely; wood, metal, fire, water and earth).

The blue against red during a traditional wedding is one instance of colors and their representation of yin and yang. Cabinets decorated in black and red is another example on display.

Visitors can also enjoy the screen from the Joseon royal court featuring a famous landscape of a sun, moon and five mountaintops; a rainbow-striped traditional garment for children; and lacquerware with mother-of-pearl inlays.

Adding to the fun, the exhibition showcases not only ancient relics but also contemporary artwork. For instance, in the white section, the porcelain pieces are juxtaposed with photographs of moon jars by renowned photographer Koo Bohn-chang. In the section about the harmony of different colors, there is an object by lacquer artist Chung Hae-cho.

“When you examine the Korean language, there are numerous words describing just one color,” director Cheon noted. “We thought that through the exhibition, visitors can learn about the colors of our country as well as the values and philosophies of our ancestors that can be found in them.”