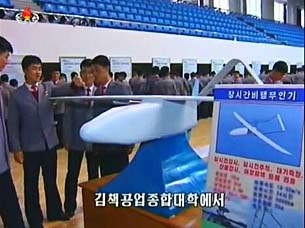 Pyongyang appears to be developing a new lighter and more durable drone for real-time surveillance, South Korea’s Ministry of National Defense said Sunday, in reference to a news segment carried out by the Korean Central Television, North’s state-run broadcaster.

According to the ministry, the North announced last Wednesday on its 8 p.m. prime-time TV news show that the Kim Chaek University of Technology in Pyongyang is creating a drone that can fly for longer and deliver real-time video.

A military official from the South said on Sunday North Korea appears to be upgrading its “very elementary” drone technology so that it can check any data from the device on a real-time basis, which it currently cannot do.

The source added that North Korea, until now, relied on flying drones over an area and reviewing any data collected upon their return.

Shin Jong-woo, secretary general of the Korea Defense and Security Forum, surmised that the North was importing drone technology from China and Russia and seeking further improvement on its own. Pyongyang is estimated to have about 300 drones.

North Korea on Saturday commemorated the fifth anniversary of the death of Kim Jong-il, whose death heralded a new rule under his son, the current leader Kim Jong-un. A ceremony was held at the Kumsusan Palace of the Sun, where the bodies of Kim Jong-il and his father, Kim Il Sung, are kept.

A source from the South’s Ministry of Unification said that the North sought “inward solidarity” through a series of events that day, starting from the Kumsusan memorial service at 9 a.m., a three-minute silent tribute at noon, and a relay airing of the morning service all throughout the afternoon on national TV.

At 8 p.m., a TV announcer delivered an address that praised Kim Jong-il’s contributions to the communist state, urging the public to stay loyal to his son, Kim Jong-un.

Meanwhile, South Korea’s Minister of Unification Hong Yong-pyo said Sunday during a press conference in Seoul that the government would “consistently maintain” its current policies against North Korea, quelling jitters of any change amid President Park Geun-hye’s passing of all presidential powers to Prime Minister Hwang Kyo-ahn after an impeachment motion against her was passed in the National Assembly.