Korea’s FTA with China does little to expand trade

Korea’s FTA with China does little to expand trade 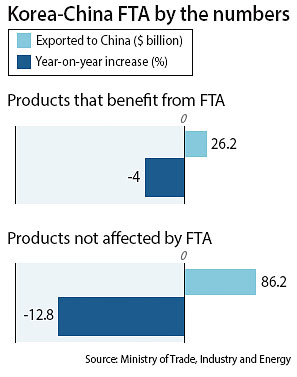 A valve manufacturer mentioned only as company K was one of the companies that benefited from the bilateral trade agreement made between Korea and China, the government said Monday. The company has saved roughly 1.9 billion won ($1.6 million) on the raw material that it has imported from China thanks to lowered custom tariffs. The company was able to hire additional employees with the savings.

A cosmetics company referred to as L exports its facial masks made of cellulose extracted from cotton seeds to China, which accounts for roughly 80 percent of the company’s overall overseas exports.

The free trade agreement with China has helped raise the company’s expansion into the country, which helped its average sales in the last three years to surge 186 percent. These were the success cases that the Korean government touted Monday in celebrating the bilateral trade agreement that kicked off Dec. 20, 2015 with the strong support of both the Korean and Chinese governments.

Korean officials, in a press release, called the FTA a success despite declining exports this year. The government argues that while the climate has been difficult, the agreement has limited Korea’s exports from falling further.

But in the first 11 months of the year, data shows that the FTA had a limited impact in expanding trade between the two leading Asian economies amid flagging momentum and soured diplomatic relations since the Korean government announced an agreement with the U.S. military on deploying the Terminal High Altitude Area Defense (Thaad) on the peninsula in July.

Korea’s overall trade with China has declined 8.5 percent in the first 11 months compared to the same period in 2015, according to the Korean Ministry of Trade, Industry and Energy and the Korea Customs Service. Korea’s exports declined 10.9 percent during this period to $112.4 billion while imports from China shrank 4.8 percent to $79 billion.

The Korean government attributed the fall in trade to the sluggish global and Chinese economies. Although China is expected to reach its growth targets of between 6.5 percent and 7 percent by the end of the year, which aligns with the OECD’s outlook of 6.7 percent, thanks to improved industrial output in November, the overall Chinese economy has been losing momentum in recent years.

In fact, the last time China reported double-digit growth was in 2010, and exports have fallen in the last five or six years.

The Korean government said although exports have fallen more than 10 percent in the accumulated 11 months, by monthly growth, the situation has improved.

In January, Korea’s exports tumbled more than 25 percent, but in November exports turned around for the first time since July 2015, edging up 0.4 percent compared to the same month a year ago.

The trade ministry also noted that Korea remains China’s biggest export market, accounting for 10.5 percent. Japan followed with 9.6 percent and Taiwan has the third-largest market share of 9.2 percent with the U.S. at fourth with 8.5 percent.

Most notably, Korea’s e-commerce exports including cosmetics, fashion products and electronics have surged 127 percent this year to 1.2 trillion won.

The government said the exported goods that benefited from the FTA with China limit their decline to 4 percent while those that didn’t benefit from the FTA fell more than 12 percent.

Yet, analysts have raised concerns over the FTA contribution to the country’s exports. Some have argued that the FTA’s impact has been undermined by souring diplomatic relations that have resulted in non-tariff barriers such as antidumping regulations that popped up in the second half.

Korean government officials, when promoting the free trade agreement with China before its ratification, stressed the bilateral agreement is an opportunity when considering trade barriers with the world’s largest market are lowered.

However, there are 111 regulations set up by the Chinese government that are barriers to free trade. This is the third largest after Europe, which has 203, and the U.S., with 200.

The Chinese government also has increased its competition against Korea’s major exported goods such as steel, computer chips and automobiles amid a turnaround in its growth policy focused on improving its domestic market.

Unlike the Korean government’s usual strategy where both countries signing the free trade deal agree to open 100 percent of the manufactured goods market, the agreement with China opens just 90.1 percent. When excluding the partial lowering of tariffs, the custom tariffs account for only 85.1 percent of export goods to be swapped in the next 20 years. This means some of the major Korean export goods, such as OLED TVs and autos, are excluded from the FTA, limiting the effect of the deal.

“The areas that weren’t opened for Korean exports not only include high value-added industries, such as medical services and research and development but also industries that Korea has the competitive edge,” said Cheon Yong-chan, a Hyundai Research Institute senior researcher. “And yet amid the worsening diplomatic and political atmosphere between the two countries, we haven’t even set the date on the follow-up negotiation for service industries and investment.”