Lotte looks toward a comeback

Lotte looks toward a comeback 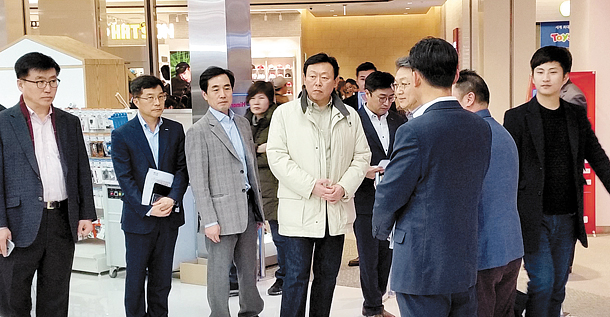 It’d be an understatement to say 2016 hasn’t been a good year for Lotte Group, the nation’s fifth-largest conglomerate. A family feud over management succession and an ongoing investigation into alleged business malpractices have forced the group to pause many of its ambitious projects.

But the company is hoping things might look up in 2017. On Saturday, Lotte won back a license to operate a duty-free shop in its landmark World Tower in Jamsil-dong, southern Seoul, giving the retail group a big morale boost. Even the company’s chairman, Shin Dong-bin, seemed to have an extra kick in his step when he made a rare public appearance at a recently opened Lotte Mall in Eunpyeong District, northwestern Seoul, on Sunday. “It alludes to his firm determination to normalize the group’s management,” a company spokesperson said.

Lotte Group would rather put 2016 behind it. With a nasty family feud in 2015 between Shin Dong-bin and his older brother Shin Dong-joo over the group’s ownership, followed by a massive prosecutorial investigation this June into alleged business malpractices, every major project scheduled for this year was canceled. Its global brand image, too, suffered.

One of the biggest hits was losing a license from the government for its duty-free business in the World Tower, which generated about 600 billion won ($505 million) a year. Then it had to indefinitely postpone an initial public offering of Hotel Lotte, which would have been the world’s biggest IPO this year at $4.5 billion. Its plan to acquire American chemical company Axiall to support affiliate Lotte Chemical also went down the drain.

Shin is now banned by a special investigation team from leaving the country because of his alleged involvement in the influence-peddling scandal surrounding President Park Geun-hye and her confidante Choi Soon-sil. Nonetheless, the 61-year-old chairman is vying to pick up the pace to compensate for a lost year.

Analysts showed optimistic views about a possible initial public offering of Hotel Lotte next year. “It is highly likely that Lotte Group will give another try at listing Hotel Lotte on the Korean market,” said Kim Keun-jong at Hyundai Securities. “It will be a signal for Lotte Group to renew its organizational structure, which has been under fire for a long time.”

Kim Young-ok at KTB Investment & Securities said the public offering could happen as early as the first half of next year.

The company’s 123-story Lotte World Tower in Jamsil-dong might also open next year. There was constant speculation that the building would not be able to finish construction by the end of this year amid doubts on its safety, but on Dec. 7, Lotte requested an approval from the Seoul Metropolitan Government to open the space to the public.

If the city’s safety inspection goes as planned, Lotte Group said it is expecting an April opening next year.