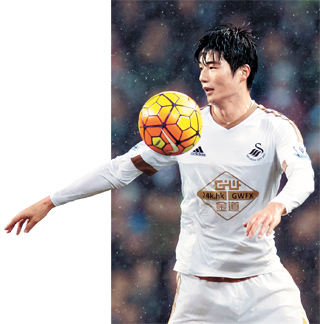 Ki, midfielder for Swansea City, earned the honors at the annual Korea Football Association (KFA) Awards. This is Ki’s third KFA top player award, after 2011 and 2012. No player has been honored more often than the 27-year-old.

Ki played in nine of 11 international matches for South Korea this year, and scored a goal against Qatar in the final round of the Asian qualification for the 2018 FIFA World Cup.

Ki has missed the past five Premier League matches with a broken right toe. He wasn’t able to attend the awards ceremony in Seoul.

Veteran goalkeeper Kim Jung-mi was named the top female player of the year. She has appeared in 104 international matches and reached the century mark during the Asian qualification for the 2016 Summer Olympics in February.

The 32-year-old has played at two FIFA Women’s World Cups. Kim played every minute for South Korea when they reached the knockout stage for the first time at the 2015 Women’s World Cup in Canada. [YONHAP]