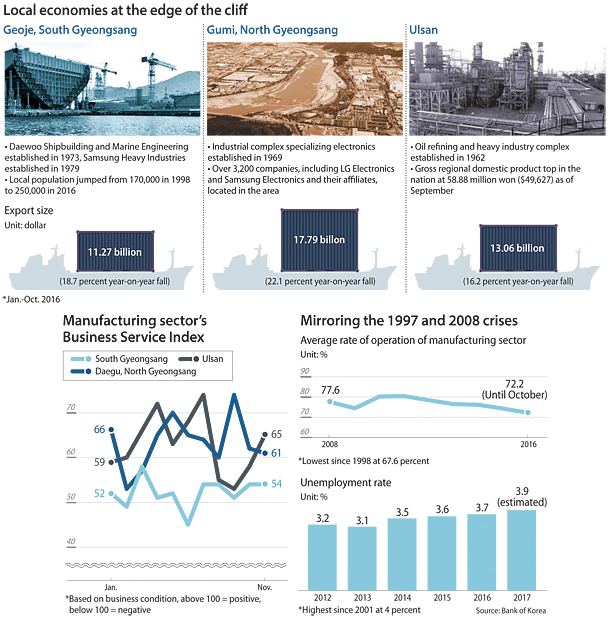 GEOJE, South Gyeongsang - Just a few years ago, the sound from factories by the coastline running at full capacity day and night filled Dong District in Ulsan. Now, with the nation’s shipbuilding industry in crisis, it’s not uncommon to see some of them completely shut down.

This isn’t just the case in Ulsan, once the industrial powerhouse of Korea. The fall of the Korean shipbuilding industry has also taken its toll in Geoje, South Gyeongsang, home to other large shipbuilders such as Daewoo Shipbuilding and Marine Engineering (DSME) and Samsung Heavy Industries (SHI).

With these companies trying to survive and shedding their workforce in the process, the welfare of the residents in the region, who once enjoyed the economic ripple effects created by the shipbuilders, have now become the main victims of the turmoil.

“My life as I knew it for the past 40 years has been turned completely upside-down in the last six months,” said a 40-year-old woman surnamed Cheon whom the JoongAng Ilbo met at a local vocational training center in Geoje this month. “I know getting a new job wouldn’t be easy, but I came out regardless since being registered in one of these classes is the only way to obtain unemployment benefits.” 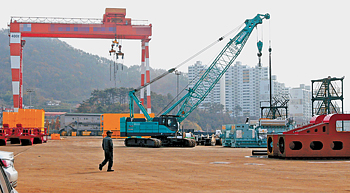 Cheon, once an assistant director of a local English preschool, was one of some 50 people who attended the job training class that day. Half of the attendees were in their 20s and 30s. “Right now, about 150 people per day attend our classes,” said a director at the center. “But the number is growing 20 to 30 percent each month.”

Cheon is a Geoje native who grew up witnessing the heyday of the Korean shipbuilding industry in her town. Her father worked at Samsung Heavy Industries to support his family. “During the financial crises in 1997 and 2008, we barely felt the tremor, unlike my college friends’ families who suffered, thanks to the impregnable shipbuilding industry my father worked for,” Cheon recalled. She eventually married another SHI worker and her life after leaving her parents remained stable. Together with her husband, their yearly income easily exceeded 100 million won ($84,200).

But a sudden about-face in her life came when the shipbuilding industry began crumbling, starting when her husband lost his job in June 2015.

Last year, Korean shipbuilders’ output began shrinking drastically and shipbuilding orders for Korean companies plummeted in just a span of a year. Shipbuilders including SHI thus pushed for drastic restructuring in an effort to salvage themselves out of limbo and sought voluntary retirements from their employees, a heavy blow to Cheon’s family.

Her husband, out of work, was just a tip of iceberg of what was to come.

Cheon’s job took a direct hit when the companies expanded its restructuring effort. With local shipbuilders tightening their workforce, fewer people in the area were able to afford to send their children to the preschool where Cheon worked. As a result, Cheon was let go from her job in October, just four months after her husband came home jobless.

“Even the price of our apartment is dropping,” said Cheon. “I am now afraid that we might fall into a lower class.”

Cheon’s husband is just one of nearly 4,600 who were forced to leave their jobs at three main shipbuilders in Korea, Hyundai Heavy Industries, DSME and SHI. Adding the workers who left small and medium-size shipbuilders as well as their subcontractors, nearly 20,000 people from Gyeongsang have lost their jobs since last year, most of them without a severance.

According to the Ministry of Employment and Labor, by the end of November, nearly 78.7 billion won has yet to be paid to the workers in the industry, a nearly 93.2 percent year-on-year increase. “The entire town is in panic mode in the face of the crisis that it has never felt on its skin before,” said an executive director of an SHI subcontractor.

More alarming for Korea than the fall of its shipbuilding industry is that other sectors are following suit. Electronics and information technology industries, anchor sectors that hold up the Korean economy, are also taking a blow from the ongoing economic downturn and rising competition from China, as people lose jobs from these sectors at a more rapid pace.

Gumi in North Gyeongsang is one of the casualties of the current decline. An industrial center that hosts Samsung Electronics’ mobile device factory, the streets in front of Samsung’s Gumi second plant in Imsu-dong, Gumi, looked like a ghost town. Locals who depended heavily on the workforce of the factories could not hide their despair. “I put my restaurant up for sale because I could not afford the rent any longer,” said an owner of a Japanese eatery in the area. “I always considered myself in the middle class but now I fear that I may fall into the lower class soon.”

Even the engineers are fleeing, with China on a relentless hiring spree. Insiders say some Chinese firms offer as much as five times the engineers’ current annual salaries. “China is closing its technical gap with Korean companies now,” said Cho Young-yul, a director from the investment and trade department at Gumi City Hall. “We need measures to support and rear small and medium-size companies for research and development to bolster growth.”