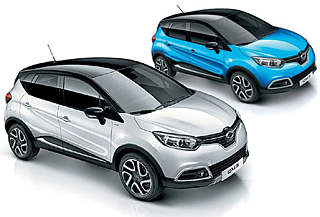 Cars with stylish colors are the new trend. To keep up with this new consumer preference, automakers are starting to focus on colors in their marketing of small-size cars.

Renault Samsung Motors’ QM3 is the representative mini SUV model that reflects this new trend, with its aggressive marketing toward consumers in their 20s and 30s. The QM3 has been released in various limited editions that feature new colors such as Sonic Red, Chocolat Brown and Cannes Blue. The vehicle also comes in a Sports Pack edition and recently released Etoile White edition.

In 2015, the car company released the QM3 RE Signature, an upgraded version of the QM3 RE, in Sonic Red and then Chocolat Brown in 2016. This heralded the start of color marketing through the QM3, featuring a black roof that complements the newly released colors.

The QM3 Cannes Blue edition generated a favorable response. Inspired by the azure waters of the French Riviera, the Cannes Blue edition was released for the 2016 summer season with a limited quantity of 500 units. Its blue body and black roof offer a unique combination of colors.

Renault Samsung Motors’ focus on color marketing is an example of an automaker quickly catching on to consumers’ taste for stylish colors. Sales of the QM3 vehicles in Marine Blue (2014), Sonic Red (2015), Chocolat Brown (2016) and Cannes Blue have risen by 1.5 times. These color editions now make up 40 percent of all QM3 sales, up from 27 percent.

Recent sales of the QM3 are showing gradual growth again, thanks to color marketing and various sales promotions. Monthly sales of the vehicle, which used to average 1,000, went up to 2,105 in October and 1,934 in November.

Etoile White, the third edition of the QM3 RE Signature, comes with high-quality map lights, aluminum pedals and visor lights as well as the latest technology such as electrochromic mirrors. The price is 400,000 won ($340) cheaper than other RE Signature models, satisfying young consumers who want stylish features at an affordable price.