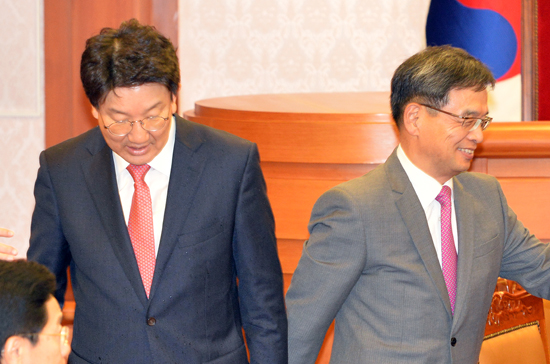 The Constitutional Court on Thursday demanded President Park Geun-hye submit evidence of her specific whereabouts and actions during the crucial early hours of the Sewol ferry’s sinking in April 2014 in her impeachment trial.

It also said Thursday it intends to hold a speedy trial of the president.

The court held its first pretrial conference in the afternoon with the Impeachment Committee members of the National Assembly and defense lawyers of the president to review the evidence and witness lists produced by both sides.

On Dec. 9, 2016, the National Assembly passed a motion to impeach Park for having committed violations of the constitution and criminal laws by allowing her secret inner circle, including longtime friend Choi Soon-sil, to interfere in state affairs.

The legislature also accused Park of failing to properly respond to the sinking of the Sewol ferry on April 16, 2014, in which 304 passengers died after a delayed government response. The motion said Park violated Article 10 of the Constitution, which demands she protect the lives of citizens.

In all, the National Assembly laid out five counts of constitutional violations and eight counts of criminal law violations.

Concerns were high that the court may need to use most or all of the 180 days allotted to the trial because of the numerous charges.
The court said Thursday it will combine the grounds for impeachment into five themes: violations concerning the influence given to the secret inner circle including Choi; abuse of power by the president; violation of press freedom; violation of the duty to protect the lives of citizens; and criminal violations, including bribery.

Last week, the court’s nine justices selected three judges, including Justice Kang Il-won, the chief judge of the impeachment case, to oversee the pretrial preparations. Justice Lee Jin-sung, mandated to collect evidence, made a particular request to Park’s lawyers Thursday to present the specific whereabouts and actions of Park during the first seven hours of the Sewol’s sinking. The Blue House has refused to make that information public, giving rise to the so-called “seven-hour mystery.”

“Most of the people in this nation remember what they were doing on the day of the Sewol’s sinking, as it was such an important day,” Justice Lee said. “I believe the defendant also has a very specific memory.”

Lee said Park must submit where she was in the Blue House compound, what she did, what was reported to her and what orders she made by each hour “without any omission.”

Lawyer Lee Joong-hwan, one of four attorneys defending Park, said, “I will meet with the president and confirm the information and submit the report with the help of the Blue House secretariat and National Security Office.”

The Constitutional Court also reviewed witness lists presented by both sides and selected presidential friend Choi, An Chong-bum, former senior secretary for policy coordination, and Chung Ho-sung, former presidential secretary for personal affairs. The National Assembly wanted to call 28 witnesses and Park wanted to call four. Those three people were on both lists. More witnesses could be added.

The court also selected some key pieces of evidence. The National Assembly submitted 49 pieces of evidence, including the indictments of Choi and other Park aides, the outcome of the prosecution’s special investigation and reports by a special parliamentary investigation committee. Media reports citing a memoir of the late senior civil affairs secretary of the Blue House, Kim Young-han, were also submitted.
Park’s lawyers presented three pieces of evidence, including records of the president’s speeches, and the court accepted them all.
The court rejected Park’s lawyers’ argument that the Constitutional Court cannot demand investigation materials from the independent counsel and the prosecution. “The Constitutional Court has the right to decide the rules of the trial within the scope of the laws,” Justice Lee Jung-mi said.

“Because the investigation records can be used in an important way in the impeachment trial, we are making a respectful yet strong request to the prosecution to produce them,” Justice Lee Jin-sung said.

The National Assembly’s Impeachment Committee also demanded that Park testify in court. “In her plea statement to the Constitutional Court, Park denied most of the grounds for impeachment and said she did not have an opportunity to explain herself,” said Rep. Kweon Seong-dong of the Saenuri Party, the chairman of the committee, who is poised to leave the party next week.

“An opportunity to give detailed explanations before the people in an open courtroom of the Constitutional Court should be given through a questioning of the defendant, so we ask the court to ask Park to attend the trial and testify.”

While Kweon said there is no way to force her appearance, the Constitutional Court said she will face criminal punishment if she refuses to show up after she is selected as a witness.

A witness who fails to show up without a proper reason will face up to 1 year imprisonment.
The next pretrial conference is scheduled for Tuesday.