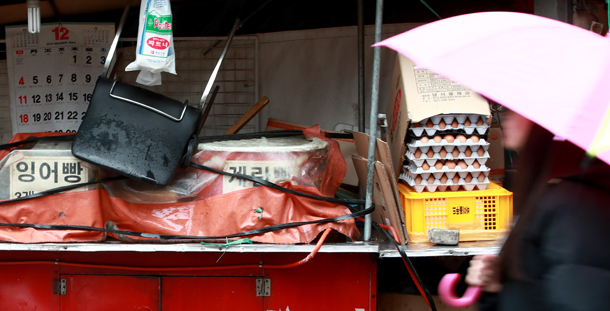 A street stall that sells egg buns in Noryangjin, southern Seoul, was temporarily shut on Thursday as egg prices skyrocketed after millions of chickens were culled in the wake of the rapid spread of avian influenza across the nation. [YONHAP]

The egg shortage in Korea is deepening, and the government announced it will waive duties on imports of eight types of processed egg products used as substitutes for eggs in the food industry.

The Ministry of Agriculture, Food and Rural Affairs said Friday the duty exemptions will last for six month starting from January and if the policy doesn’t relieve the current egg shortage, the ministry will consider importing fresh eggs from the United States, Canada and Australia. Currently, Korea doesn’t import fresh eggs.

Eggs are in short supply after a widespread outbreak of avian flu and the culling of 20 million birds, or nearly a quarter of the poultry in Korea.

“There were requests to waive the tariffs on imported processed egg products,” said Kim Kyung-kyu, an official at the ministry during a briefing Friday. “Bakeries can use processed ingredients in their breads, which are expected to help on costs,” he added. The import tariff on processed egg products like powders range from 8 to 30 percent.

A task force launched by the Agriculture Ministry and Finance Ministry also said it is considering allowing some eggs to be sold that had been banned.

Paris Baguette, the largest bakery chain in Korea, said Friday it suspended 19 of its products, including muffins and cake rolls Thursday amid allegations that parent company SPC Group, the nation’s top food and bakery company, ordered employees to hoard eggs from local retailers.

“We need about 80 tons of eggs a day which is 600,000 trays of eggs,” said an SPC spokesman. “It is inevitable to suspend some items until the supply is normalized.”

He added that nine out of 21 suppliers stopped supplying eggs to the company.

Individual businesses are having an even harder time coping with the egg shortage.

Ms. Lee, who recently opened a sponge cake shop in Eunpyeong District in northwestern Seoul, said she is just “bearing it out” until the situation gets back to normal.

“It is hardly possible to secure half the amount of eggs we need daily,” said Ms. Lee. She needs 70 trays daily on average.

“We cannot completely shut down the store because we already finished the rent contract and interior decoration. My family runs around discount chains every morning to secure as many eggs as possible,” she said.

Gimbap shops have stopped putting rolled omelet inside rolls and restaurants that gave free omelets as a side dish, a common practice in local eateries, are no longer offering them.

“The wholesaler I use said he failed to secure enough eggs for all of his customers. He suggested I buy eggs at my local supermarket but I cannot afford to do that,” he said.

E-Mart and Lotte Mart recently started restricting purchase of more than one tray of eggs per person.

E-Mart instituted the limit in all of its 147 branches nationwide on Thursday after raising egg prices by an average of 15.8 percent over the past two weeks. Lotte Mart raised its prices by 20 percent following purchase restriction that went into effect Tuesday.

Provincial governments started coming up with ways to curb the further spread of the virus.

Ulsan canceled a New Year’s Day sunrise celebration at its famous Ganjeolgot Point. Official said it was a “necessary step since there have been reports of bird flu in nearby cities such as Busan and Daegu.” Ulsan is currently free of any bird flu virus.

Incheon and the cities of Gunsan and Gimje in North Jeolla said Friday they would cancel festivals planned for New Year’s Day in order to restrict large gathering of people.

Those actions are being criticized for being too little and way too late.

“If only they had succeeded in curbing the spread of the disease from Pocheon in Gyeonggi, it would not have led to so much hardship for many people,” said Kang Seong-jong, head of Korea Egg Distribution Association. “I think there was hardly any initial response at all.”