2017 growth estimate is cut by one more institute

2017 growth estimate is cut by one more institute 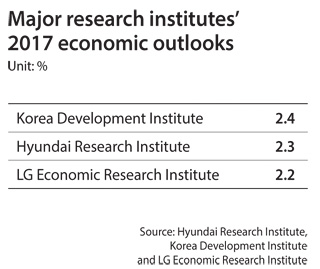 A private think tank lowered its 2017 outlook for the Korean economy from 2.6 percent to 2.3 percent Monday, as several have done in recent weeks.

Hyundai Research Institute released a report Monday that lowered a projection made in September. The report said the domestic economy is likely to remain sluggish due to political uncertainties following the impeachment of President Park Geun-hye.

Hyundai cited weak construction investments and domestic consumption as other main reasons for the lowered projection.

The government is expected to release a new economic outlook later this week and officials have said it will be slower than the 3 percent it previously projected.

The Bank of Korea is also expected to lower its outlook of 2.8 percent next month.