Jaurim’s lead vocalist shines in the dark : Known for her sad songs, Kim Yuna is trying ‘to be happy’

Jaurim’s lead vocalist shines in the dark : Known for her sad songs, Kim Yuna is trying ‘to be happy’ 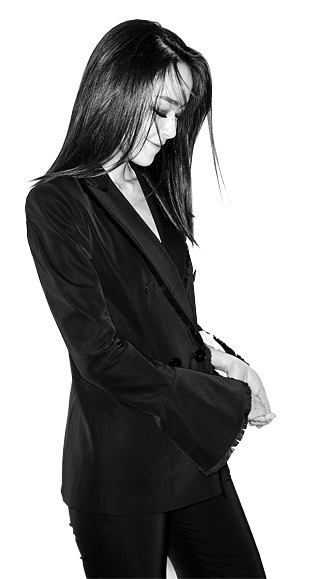 Singer-songwriter Kim Yuna says her latest album is not a direct tribute to the 2014 Sewol ferry sinking, but she does think the whole country has been traumatized since and that music can heal. [INTERPARK]

Listening to the songs of Kim Yuna makes listeners feel like they are going into a deep cave.

Her songs are often dark and lonely, and certainly made to be sung solo.

It also explains why many people go to Kim’s concerts alone.

The 43-year-old singer-songwriter Kim Yuna, who recently released her fourth album as a solo artist, titled “Pain of Another,” held a concert earlier this month in Seoul. Kim sang her emotional songs and the concertgoers held their breath, listening to each word.

Kim, who is also the lead vocalist of rock band Jaurim, said in a recent interview with JoongAng Ilbo that some people shed tears. “The songs are quite strong, I think.”

Perhaps part of it has to do with the album title, but it’s undeniable that the songs somehow remind people of the tragic Sewol ferry sinking in 2014. Lyrics like “River flows to the place it will never be coming back/Who would hold your hand,” and “It all goes/It all gets forgotten/Scars heal/Eventually flower blooms” particularly ring a bell to those who haven’t forgotten the accident that killed more than 300 people, mostly students.

Her nine-year-old son, who heard the songs before the album was released, told her that all of the songs are “so sad.”

“Many people did tell me that they were reminded of the Sewol ferry,” she said. “I didn’t write the songs with the tragedy in mind, but I guess all of us cannot get over that accident, and feel a sense of guilt.”

Kim said she does think everyone in the country was deeply traumatized and therefore needs to be healed.

Asked why she often writes songs that are gloomy she said it’s because death is something that was prevalent in her childhood.

“I achieved my dream of becoming a musician and married my best friend. My baby boy is so sweet and he’s showered with love from his grandparents. Yet, I think a person’s character is formed at an early age,” she said. “When I was young, my father and some of my siblings died due to cancer. Death, therefore, was something that was a norm in my family. Death dominates me so I can’t help it from permeating in my music.”

Asked about her famous relationship with her husband, Kim Hyung-kyu, who is a VJ-turned-dentist, she said the two were actually opposites. “My husband is like a good tree that is fostered with lots of warm love. I, on the other hand, was someone who was used to death.” But now, she says, she’s become a person who can’t die when she wants and he’s become one who’s willing to die any moment for her and their son. “I find that so touching,” she said.

Still the lead single for her album is “Dream.”

Kim says she always dreams of becoming a happy person. In fact, she says she sings to become happy. And she believes she is getting there.

“My life’s goal is to be happy and I need music to be happy,” she said.

On plans for Jaurim, which will be celebrating its 20th year next year, Kim said she wants to do a “real wild experimentation” for the band’s next album. Jaurim is one of longest-running bands in Korea with both female and male members whose original members haven’t changed since its debut.