‘Army merging is the crux of unification’

‘Army merging is the crux of unification’ 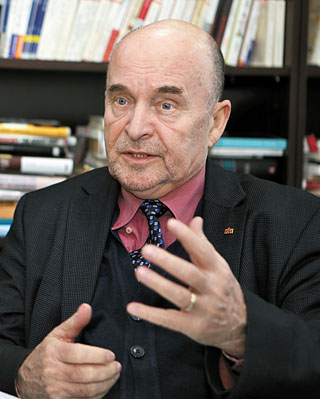 At the time of Germany's unification, the East German army was just around 90,000 strong. Thus, the merging of the German Democratic Republic’s Nationale Volksarmee (NVA) troops with the West German Bundeswehr happened relatively smoothly in 1990.

In contrast, Pyongyang’s army is 1.2 million strong, making disarmament or a merger with the South Korean military far more difficult a task. It is therefore necessary to research what would become of the North Korean People’s Army to prepare for the unification of the Koreas.

Rainer Eppelmann, 73, who served as the former East German minister for disarmament and defense, sat for an interview with Kim Young-hie, an editor-at-large at the JoongAng Ilbo, last month, and lent insight into Germany’s unification process in 1990, as the person who dealt with what to do with East Germany’s army.

“At the time of unification of Germany, I was 46 years old,” said Eppelmann. “If I live to be 93 years old, I would live to 47 years after unification, which would make the period that I lived in a democratic society longer. But the East Germany I lived in for 46 years still exists within me. My way of thinking, acting, everything is inherently East German. Some people tried to forget the times in East Germany because they are bad memories. But forgetting is not so easy. My wife works at a psychiatric clinic and says there are many former East Germans who come with their sufferings. Becoming one requires that much time.”

Eppelmann served as one of the founders and leader of the Democratic Awakening, a political movement in East Germany founded in 1989 supporting German unification.

German Chancellor Angela Merkel began her political career in this party and became a deputy spokesperson for Lothar de Maiziere, the only democratically elected prime minister of the German Democratic Republic.

This party later merged with the East German Christian Democratic Union, which in October 1990 merged with its West Germany counterpart. Eppelmann is a member of the CDU, currently headed by Merkel.

Q. How to integrate the two armies was an important issue in the process of unification for Germany, as it is for Korea. How was it possible in Germany?

A. One of the reasons why East Germany’s troops could integrate into the West German army was there was no putsch in East Germany after the fall of the Berlin Wall on Nov. 9. But there was a situation where there could have been a military putsch, based on information that has been revealed since.

It is news that leading officials in the East’s Nationale Volksarmee, or the National People’s Army, had considered a military putsch at that time. When did this take place?

It was right after the Berlin Wall fell, between Nov. 9 and 10, according to my predecessor former Defense Minister Heinz Kessler [who served in the post from 1985 to 1989].

Kessler at this time was going to issue a command to send non-armored tanks to Brandenburg Gate [in Berlin] and break up the protesters gathered there. The related unit was already warned that such a command was going to come down, and this unit was in strife over what to do when the command fell on them.

But because Kessler didn’t want to shoulder all the blame himself, there were long discussions with the NVA’s leading officials. And Col. Gen. Joachim Goldbach, the NVA’s then commander, proclaimed insubordination. That was probably the first time in his life not complying with an order. After several hours he said, “I cannot support this command.”

He did later receive criminal punishment for insubordination. While he was a leading official as the commander of the NVA, he was also a member of the national defense council, thus held political responsibility as well.

I had a chance to speak in person with Goldbach, and he told me, “At the decisive moment, I made the right decision of insubordination against the order to mobilize the army. However, because I had already committed a lot of wrong before then, I think I received criminal punishment.”

Truthfully, I’m not sure what sort of conversation took place between Kessler, when he was defense minister, and Boris Snetkov, the commander of the Soviet armed forces stationed in East Germany at that time.

However, the Soviet army sometimes did issue commands when conducting joint operations with the NVA as an allied country. What is really a relief is that at that time the Soviet Armed Forces’ tanks were not mobilized.

Because this was after then Soviet Union President Mikhail Gorbachev abandoned his “Brezhnev Doctrine” and proclaimed he would not deploy the Soviet army to intervene in domestic affairs.

However, if the East German leadership requested for it, the Soviet army could have mobilized its troops. As you pointed out, quite a number of Soviet troops were already stationed in East Germany. There were 350,000 soldiers, and 280,000 administrative officials and their families.

Then Soviet commander in East Germany, Boris Snetkov, at that time was considerably hawkish. If East Germany at that time requested for it, regardless of Gorbachev’s principle not to intervene, the Soviet forces would have been mobilized.

What was the administrative process like in the integration of the NVA into the West German army, since this is an important task for the unification process of the two Koreas, as well?

Gerhard Stoltenberg, [West Germany’s] defense minister, and I made decisions which made the NVA uncomfortable.

Secondly, there was the issue of ranks. In the case of East Germany, soldiers rose in the ranks much quicker than in the West, so their ranks were lowered around two notches.