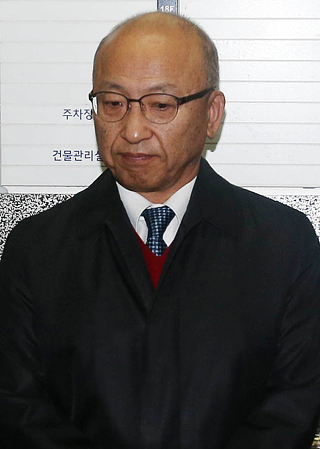 Former Minister of Health and Welfare Moon Hyung-pyo was arrested early Wednesday morning on charges that he coerced the National Pension Service to approve a controversial merger between two Samsung units last year.

It was the first arrest by an independent counsel that last week launched a 70-day probe into the abuse of power scandal that led to President Park Geun-hye’s impeachment. The 108-member squad, the largest independent counsel in Korean history, will ultimately decide whether Park should be indicted when she leaves office.

One possible charge is that Park committed third-party bribery, which could put her in jail for at least five years - or in the worst-case scenario, her entire life, depending on the amount of money involved.

The merger between Samsung C&T and Cheil Industries is one of several business deals that are being linked to Park’s alleged strong-arming of conglomerates to donate to two foundations. The independent counsel is trying to find business favors given to those companies in return.

Moon, who currently serves as President and CEO of the National Pension Service, was detained on charges of abuse of power less than 24 hours after he was summoned for questioning. The 61-year-old, who was called in as a witness on Tuesday, was relabeled as a suspect soon after the independent counsel said it collected several key pieces of evidence and testimony that indicated he illegally played a key role in the merger.

Moon has denied all the allegations.

Key testimony that led to his arrest came from Hong Wan-sun, the National Pension Service’s former chief of investment management, who was summoned Monday. He claimed he was forced by the Ministry of Health and Welfare to approve the merger of Samsung C&T and Cheil Industries.

The National Pension Service, the world’s third-largest pension fund and Korea’s largest institutional investor, was the largest shareholder of Samsung C&T, owning a 9.54 percent stake at the time.

Hong asserted that he was given the order by a senior official from the ministry’s Bureau of Health Insurance Policy. The counsel believes the order originally came from Moon.

The independent counsel has up to 48 hours (until Friday at 1:45 a.m.) to decide whether to request a detention warrant from a local court for the former health minister.

According to briefings from the counsel, Moon allegedly ordered a top ministry official last year to tell the National Pension Service to have its investment management department unilaterally push through the merger, eschewing the normal process of putting it up for a vote by a core decision-making committee within the pension fund.

Whether President Park was at the top of that chain of command has not been proven.

The $8-billion merger between Samsung’s two units was sealed on July 17, 2015, despite analysts and some shareholders saying the deal would be detrimental to Samsung C&T. The deal was meant to solidify group heir-apparent Lee Jae-yong’s grip on Samsung Electronics.

Samsung was a generous supporter of presidential friend Choi Soon-sil’s daughter Chung Yoo-ra, an equestrian athlete. The company pledged 22 billion won ($18.2 million) for her training, signed a contract with a company created by Choi in Germany and paid it about 8 billion won. Separately, it contributed 20.4 billion won to two nonprofit foundations controlled by Choi, the Mi-R and K-Sports foundations.