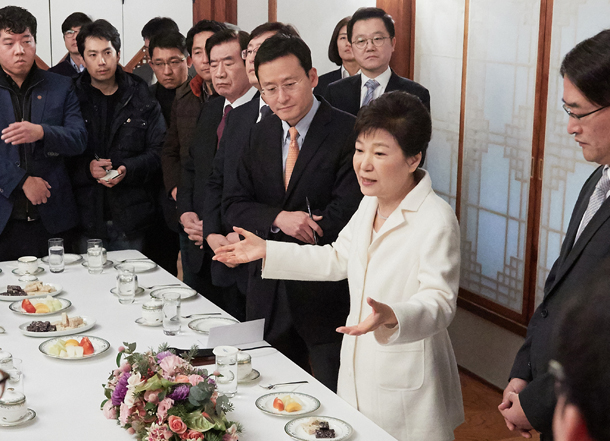 President Park Geun-hye hosts tea time at the Blue House with reporters on Sunday afternoon, the first such meeting since she was impeached on Dec. 9. [YONHAP]

President Park Geun-hye defended herself on Sunday against all accusations raised by the National Assembly, the prosecution and the independent counsel, particularly those concerning her whereabouts during the early hours of the Sewol ferry’s sinking on April 16, 2014.

Park, who was impeached on Dec. 9, talked to reporters at the Blue House on Sunday to mark New Year’s Day. Immediately after her impeachment, she was suspended from her post, but is keeping the title while the Constitutional Court decides whether to remove her from office.

The National Assembly impeached Park for violating the Constitution and criminal laws by allowing her secret inner circle, including longtime friend, Choi Soon-sil, to interfere in state affairs, and for failing to properly respond to the Sewol ferry sinking, in which 304 passengers died after a delayed government response.

Park said Sunday rumors and inaccurate reports are rampant, particularly on the issue of the Sewol tragedy.

She said the media first accused her of having a love affair during the first seven hours of the ferry’s sinking, then of hosting a shamanic ritual. “Now rumors say I underwent [cosmetic] surgery,” she said. “There is just no end.”

Park said she checked on the situation regularly from her residence, because she worked from her home office that day. When asked why she did not hold a meeting or go to the Blue House office, Park said, “I thought it was best to handle properly at the accident site, rather than sitting for meetings.”

Last month, the Constitutional Court ordered Park to submit evidence of her specific whereabouts and actions on the day of the sinking. Park’s attorneys promised to submit a report by Thursday.

During her meeting with journalists on Sunday, Park also pleaded her innocence in every major abuse of power charge raised by the prosecution and currently being investigated by the independent counsel.

When indicting Choi and a former Blue House aide on charges of coercing conglomerates to make massive donations to cultural and sports foundations that were practically controlled by Choi, the prosecution said Park was a co-conspirator.

Another key part of the independent counsel probe is a bribery allegation involving Park, Choi and Samsung Group. Independent counsel Park Young-soo and his team are investigating whether Park and Choi influenced the National Pension Fund’s support for a controversial merger of Samsung Group’s two units last year.

Defeating a campaign by a U.S. hedge fund, Elliott Management Corp, to block the planned merger, shareholders of Samsung C&T approved its takeover by Cheil Industries on July 17, 2015.

The National Pension Service was the largest shareholder of Samsung C&T. Although advisory firms recommended the pension fund to vote against the merger, it went ahead and supported the deal, fueling suspicions of undue influence over the decision.

Samsung Electronics was a generous supporter of Choi’s daughter, Chung Yoo-ra, an equestrian athlete. It promised 22 billion won ($18.4 million) for her training. Samsung was also the largest benefactor of the two nonprofit foundations that Choi practically controlled, contributing 20.4 billion won.

The sponsorship and donations are suspected to be bribes in return for Park and Choi’s influence over the pension service to approve the deal.

On Sunday, Park flatly denied the accusation, although she did support the idea of the merger.

“I was completely weaved into the story,” Park said. “I can assure you that I did not have the slightest intention to help anyone.”

Park said the merger was a popular issue at the time.

“The people paid attention to the situation in the belief that it is a great loss for the country if an important company like Samsung is attacked by a hedge fund and [the merger] flops,” Park said. “As the president, I, of course, thought the pension fund must deal with this grave issue smoothly. No matter what decision it made, I believed it was a just judgment in policy. But I have never ordered anyone to help the company.”

Regarding rumors that Choi was pulling the strings, Park said, “as president, I have a duty, and how dare they say that my friend controls everything.”

She stressed that she ran the country with her own “philosophy and conviction.”