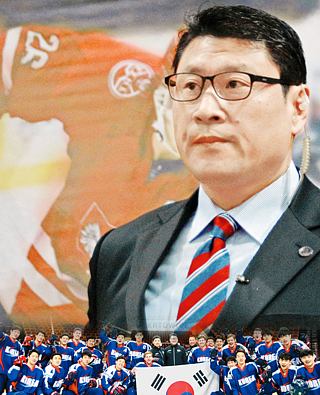 “What is the reason for a National Hockey League (NHL) star to become a Korean coach?”

Half of the Winter Olympics earnings come from one event, ice hockey, but there are just three domestic professional ice hockey teams and only 133 players.

Ice hockey is therefore far from being Korea’s national past time - it is ranked 23rd in the world.

The opponents in Group A are ice hockey heavyweights. There’s Canada, which is ranked first, Czech Republic, which is sixth, and Switzerland, which is seventh. After the group compositions were released, the Korea Ice Hockey Association released a statement saying, “Korea will suffer a 0-20 humiliation by Canada.”

Yet Korean ice hockey is changing. In the Euro Challenge in November, Korea defeated both Australia and Hungary in surprise victories. Also, after initially suffering a crushing 0-25 defeat in 1982 against Japan, Korea won its first victory against Japan in the Ice Hockey World Championships in April with a score of 3-0.

This was the magic conjured by Paek, who met with JoongAng Ilbo last month and said, “I was born in Seoul, but I immigrated to Canada when I was one.”

Paek also said, “My father, Paek Bong-hyeon, passed away in 2014. His last wish was, ‘You’re Korean. You must defeat Japan.’ So I rejected the NHL’s proposal and returned to my motherland. The first time Korea won against Japan on April 26th was my father’s birthday. It’s as if I gave a valuable present to my father, so I’m pleased.”

Recollecting his childhood, Paek said, “To develop my endurance, I ran up countless hills. There was even a time I went along with [American] football players who would push cars from behind as part of their training.”

Paek first appeared in the NHL for the Pittsburgh Penguins as a defenceman in 1991. He was able to taste sweet victory, winning the Stanley Cup in his debut year and the year after.

After retiring as a player in 2003, he received leadership training under Mike Babcock, who had unfortunately brought two straight losses to Canada in the Olympics.

“An ice hockey coach has to solve a puzzle,” said Paek. “How to manage a 22-person roster is important.”

Games are frenetic, so players are substituted out after a period of 48-50 seconds. There are six people in an ice hockey team with three designated periods of 20 minutes each. Excluding the goalie, five players circle the rink three or four times.

Paek’s strategy is something he calls “Bee Swarm Hockey,” engaging both players’ offensive and defensive skills.

This strategy involves having five players target the defense, neutral and attack zones in a 5-5-5 formation.

“The players’ frames may be small, but our team can deliver big plays,” said Paek. Shin Sang-hoon, 23, for instance, a player for Anyang Halla and a winger for the national team, is merely 171 centimeters (5 feet 7 inches).

“Nowadays in hockey,” Paek added, “speed and technique is more important than strength.”

Another change Paek introduced was to have athletes travel in formal dress.

There are six foreign players on the national team who have become Korean citizens through special naturalization for those with special talents.

Chung Mong-won, 61, the president of the Korea Ice Hockey Association, said, “The objectives are winning gold medals in next February’s Asian Games, advancing in the World Championship in April and continuing to the round of eight in the PyeongChang Winter Olympics.”

Considering the present state of the national team, these may seem like excessive expectations, but Paek considers that a good thing.

“I want to create a better now than the past,” he said. “We can do this if we live day by day.”