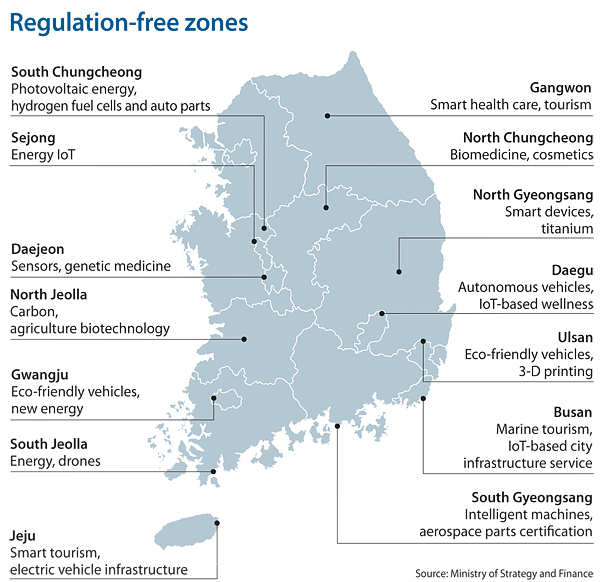 Since the city of Daegu was designated a special zone to develop self-driving car technology a year ago, it has been trying to push forward with its agenda to become the industrial leader. As part of its effort, the city has asked the central government to allow test drives of autonomous vehicles on public roads.

There’s just one problem: Despite the government’s policy direction announced at the end of 2015 to establish “regulation-free zone” nationwide, no notable steps have been taken and Daegu’s autonomous-vehicle project is stuck in limbo.

“If this project proceeds as planned, we expect it will create 14,115 new jobs,” said an official from the automobile division of the future industries headquarters of Daegu City Hall. “But the deregulation as the government promised is yet to see any discernible outcome and we are unable to move forward.”

More than a year has passed since the Park Geun-hye administration introduced its policy to designate deregulation areas, dubbed “regulation-free zones,” and bolster new growth engines for the Korean economy. The government set 14 free zones in late 2015 and assigned each of them different industries, while promising that they would gain a free pass to conduct experiments in order to innovate and gain competitive edges in their sectors.

However, related legislation has been put on the shelf at the National Assembly in the wake of the scandal involving the president and her confidante Choi Soon-sil, not to mention the continuous objections by some civic groups, who argue the policy would just give unfair advantages to conglomerates. As a result, the government has turned away from enforcing the policy it has promised.

A set of laws was submitted in March to the National Assembly, who said they would conclude its enactment by May, and disclose details on tax benefits and financial support. But the ruling party’s defeat in an April general election put everything on hold. Although the new legislature began talks on the topic again, the bill faced a new obstacle with the outbreak of the Choi scandal in October. The policy has been stigmatized since then by some as a joint scheme made by the president, Choi and the Federation of the Korean Industries. To make matters worse, with Park’s impeachment trial and related hearings taking place until early this year and the possibility of an early presidential election looming, some worry that the policy will be thrown off the table completely.

Despite myriad difficulties, finance minister Yoo Il-ho urged the National Assembly early last month to pass the legislation as soon as possible, saying there is no controversy involving the bill. Cho Kyung-tae, the chief of the parliamentary finance committee, said they will discuss the bill this year.

While the bill is in lockdown, regions across the nation are running out of patience. Without the tax break and government funding, as well as deregulation and policy support by the government, it’s simply impossible to get the ball rolling.

North Jeolla, assigned with carbon and agriculture biotechnology sectors, plans to create an agricultural belt by establishing a research complex and food cluster. “The new plans will be able to create more than 1,000 jobs,” said an official from the strategic management division in North Jeolla Provincial Office. “But they are only possible under the new law.”

Officials in Ulsan concurred. Ulsan, hit hard by the recent downturn of the shipbuilding industry, has been looking for an economic revival through new growth engines by innovating technologies related to 3-D printers and eco-friendly vehicles. However, the city is yet to benefit from the government’s pledge in 2015.

“The government said it would foster growth in certain industries, which can only be actualized once “regulation-free zone” bill is passed,” said an official from the creative economy executive division in Ulsan City Hall, who commented on the condition of anonymity. The official added working conditions related to hydrogen vehicle industry, the city’s main target, haven’t improved.

“We requested the government loosen the regulations on distance between hydrogen stations as well as on importing pressure containers used for the charging stations,” he further explained. “The government said it will do all these things step by step but we need to check if anything has actually happened yet as it promised.”

Song Suk-doo, vice mayor of Daejeon, summarized the rising concerns. “The ‘regulation-free zone’ policy was intended to vitalize the regional economy, which often lags behind that of Seoul and its greater area. We hope that politicians pay attention to the bills that concern the livelihood of the people and economy outside Seoul with no political agenda behind.”