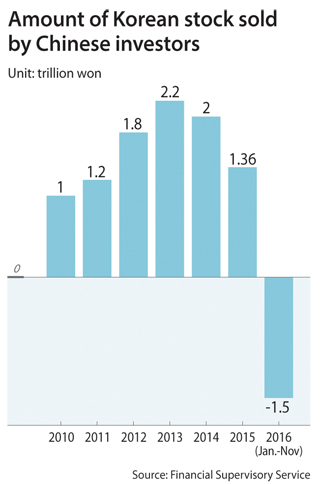 Rancorous political relations between Seoul and Beijing are said to have affected Korea’s entertainment and tourism industries, and now there appears to be a new victim: the Korean stock market.

In the first 11 months of last year, Chinese investors pulled 1.5 trillion won ($1.2 billion) out of the Korean stock market, the country’s financial regulator, the Financial Supervisory Service, said Wednesday. The sell-off particularly picked up after July, when the Korean government decided to deploy a controversial U.S.-led missile defense system on the peninsula, a decision that has drawn the ire of the Chinese government. Between August and November, Chinese investors sold off 680 billion won worth of stock, accounting for 45 percent of all stocks sold in the first 11 months of the year.

The mass offloading is a stark change from the trend of the past few years of Chinese investors increasing their holdings in Korean companies. Relations between the two countries picked up under the Park Geun-hye administration and rode high on the popularity of Korean pop culture in China. Between 2010 and 2013, when President Park took office, Chinese investment in Korean stock more than doubled from 1 trillion won to 2.2 trillion won.

The Chinese exit from the Korean market stands in direct contrast with other investors that are net buying. American investors, which account for the biggest portion of foreign investors at 40.31 percent, bought 5.22 trillion won in the first 11 months of last year. British investors, the second-largest group, bought nearly 1.7 trillion won, and investors from Luxembourg bought nearly 4 trillion won worth of Korean stock.

As of the end of November, foreign investors own 31.4 percent of Korean stocks, amounting to 469.9 trillion won.

But considering that Chinese investors only account for 1.83 percent of the Korean stock market, the impact of the recent selling spree is expected to have a limited effect, especially since Chinese investor movement in bonds has shown little signs of change, according to a Financial Supervisory Service official.