Sixth-century mokgan give look into past

Sixth-century mokgan give look into past 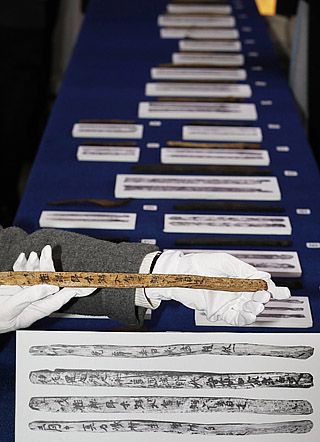 Sixth-century wooden sticks with writings on them found in the Seongsan Sanseong in Haman County, South Gyeongsang. [YONHAP]

What is notable is that the writing is written on a piece of wood. Known as mokgan in Korean, such wood sticks with writings on them were used before paper was made. They were in use until the Joseon Dynasty (1392-1910) because wood was more durable and cheaper than paper.

On Jan. 4, officials of the Gaya National Research Institute of Cultural Heritage announced results of the latest round of archaeological explorations at Seongsan Sanseong, which has lasted from 1991 to 2016.

They said the highlight of the last round, which took place over two years starting in 2014, was the 23 mokgan.

The sixth-century writing, which is one of the finds, is rare in many ways.

“Mokgan was usually a label that specified details like items, their origin and destination,” said Kim Yong-min, a researcher at the institute. “But this one is rare in that its writing is well-organized, with parts like an introduction, body and conclusion.”

Researchers added that it had all the elements of an official document, such the writer’s name, addressee and when it was written.

“In fear, county head of Jinnaemyeol [a region’s name] reports the following,” the writing says. “A person named Itari, with rank Geupbeolcheok, said according to regulation, he is paid to work 30 days. But it turns out he was paid to work 60 days. I was a fool.”

What makes this relic more unique is the writing is made not just on one side of the wood but all four. Such a full-faceted mokgan has been found in the past, but few have such well-organized writing. This one, measuring 34.4 centimeters (13.5 inches) long, is particularly longer than others.

Where the mokgan were found is also quite dramatic.

Seongsan Sanseong (Korea’s Historic Site No. 67) was an oval-shaped fortress built on Mt. Jonam by the kingdom of Silla (57 B.C.-A.D. 935). Built in the mid-sixth century, it measured 1.4 kilometers (0.9 miles). Historians say Silla rulers built the fortress to beef up defense against the kingdom of Baekje (18 B.C.-A.D. 660).

As Seongsan Sanseong was built near a valley, the Silla people created a thick layer of wood, plants and other materials to strengthen the foundation of the fortress.

The study of mokgan is very active in Korea. There is an academic society dedicated solely to studying the wooden sticks, as they provide ample insight into ancient Korea that cannot be found in historical texts.

In the mokgan from Seongsan Sanseong for instance, names of feudal ranks that could not be found in “Samguksagi,” the 12th-century historical text of Korea’s Three Kingdoms, appeared on the sticks, historians said.

It also shows how Silla’s central government had a strong grip on its local confederacies such as Gaya.

Korea’s Gaya was a confederacy of territories in southern Korea between the first and sixth centuries. In its later years, Gaya was ruled by Silla before it was completely absorbed into Silla in 562.