Rep. Suh accuses In of turning Saenuri into ‘interest group’

Rep. Suh accuses In of turning Saenuri into ‘interest group’ 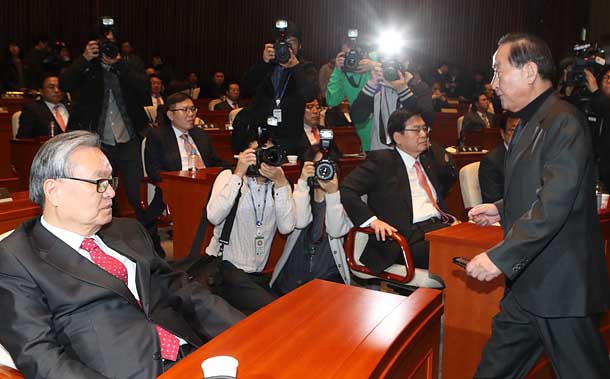 Rep. Suh Chung-won, right, walks back to his seat after lashing out at party interim leader In Myung-jin, left, at the Saenuri lawmakers’ meeting in the National Assembly on Tuesday. [OH JONG-TAEK]

Rep. Suh Chung-won of the ruling Saenuri Party lashed out at party interim leader In Myung-jin during a party meeting on Tuesday, accusing the career pastor of turning the party into his own interest group and of illegitimately demanding that Park Geun-hye loyalists leave the party.

The open conflict once again laid bare a deep strife among the Saenuri leadership led by 70-year-old In and a group of pro-Park members, virtually led by the eight-term lawmaker Suh, as In is accelerating steps to purge Park supporters to contain damage from the Choi scandal.

Standing before party lawmakers, including In, the 72-year-old veteran lawmaker claimed the party leader was “not qualified to demand me to give up my party membership or draw up a letter of apology.” Suh went on to criticize In for trying to turn the party into his “personal interest group.”

“In called me a rotten tumor in blatant disregard for my 33-year career in politics,” said Suh.

Suh, who virtually leads Saenuri’s pro-Park faction, which has come under increasing pressure to leave the party, made it clear he would not bow to In’s demand to defect.

“Many lawmakers questioned whether I could overcome this,” Suh said. “But I will not surrender. I will keep my party membership until the pastor stops his dictatorial ways.”

Pressure has also been put on former finance minister Choi Kyung-hwan and Yoon Sang-hyun to leave the party for having abetted President Park’s controversial friend, Choi Soon-sil. In, a career pastor, was named last month as head of the Saenuri’s emergency council to contain damage to the party caused by a scandal that led to the president’s impeachment.

The 70-year-old pastor’s first reform initiative was a purge of diehard Park loyalists from the party. While Saenuri former Chairman Lee Jung-hyun submitted to In’s demand and left, others did not.

While Suh and other key Park loyalists rejected In’s demand, In is expected to put further pressure on them. Cementing his authority, In appointed four party members as members of the emergency council in charge of party affairs on Monday. The formation of the five-member council, comprised of In himself, former Gyeonggi governor Kim Moon-soo and Saenuri floor leader Chung Woo-taik, is seen as a significant setback for pro-Park members.

The formation of the emergency council came despite obstruction efforts by the pro-Park members, as they tried to prevent party members from attending a standing committee on Monday to name council members.

In revised the number of standing committee members from 51 to 46 early Monday, in an effort to reduce the required number of attendees in the meeting by three - from 26 to 23.

With the launch of the emergency council, In is set to form the party’s ethics committee, which is expected to officially demand Suh and his fellow Park loyalists leave the party or suspend their party memberships.