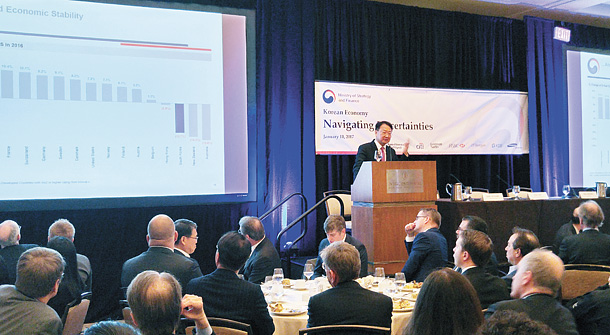 The executive offices of the Sejong government complex have been rather quiet lately.

For the past two weeks, the country’s top financial policy officials, including Finance Minister Yoo Il-ho, have been traveling overseas to assuage foreign investors’ concerns about the Korean economy and explain the government’s fiscal policies.

“The political impact will be minimized,” Yoo said referring to the recent impeachment of President Park Geun-hye. “Although it is difficult to quantify, it seems it has had little influence on the financial market.”

He also told investors that the Korean government’s involvement in private companies has shrunk significantly “out of necessity.” “We will continue to work so that companies’ decision-making structures become transparent,” he said.

A day earlier, the finance minister met with Lloyd Blankfein, CEO of Goldman Sachs, and Stephen Schwarzman, CEO of the Blackstone Group. The meetings were said to be Korea’s attempt to create ties with the incoming Donald J. Trump administration. The president-elect’s pick for Treasury secretary, Steven Mnuchin, was once a partner at Goldman, and Schwarzman was selected by Trump last month to lead an advisory group on economic policies.

In two 30-minute meetings, Yoo relayed to Blankfein and Schwarzman the Korean government’s promise of favorable relations with the United States and cooperation with the Trump administration, according to the Ministry of Strategy and Finance.

Even before his trip to New York, the finance minister was meeting with global financial investors in Boston.

Yoo’s aggressive promotion abroad comes as concerns are growing about the so-called Korea discount, referring to the amount by which investors undervalue Korean stock. This discount could exacerbate as the country faces a leadership vacuum left by President Park’s impeachment. The grounds for her dismissal stemmed from allegations that one of her longtime confidantes, Choi Soon-sil, reaped money from Korean conglomerates in exchange for political favors. One case involves the National Pension Fund approving a merger between two Samsung affiliates that would give the conglomerate’s heir apparent, Lee Jae-yong, stronger control over Samsung.

The scandal revealed heavy wheeling and dealing between the government and conglomerates. It exposed Korean companies’ lack of transparency and damaged their public image, even freezing consumer and business sentiment.

In response, the Finance Ministry lowered its GDP growth target for this year to 2.6 percent, the lowest in 18 years. The OECD, too, recently readjusted Korea’s economic outlook to 2.6 percent, and some private think tanks projected a far lower growth rate of around 2.1 percent. The Bank of Korea will be announcing its outlook for this year today.

Korea’s credit score could also take a hit. Currently, the country’s credit score is at its highest. Moody’s has rated Korea Aa2, while Standard & Poor’s has evaluated Korea at AA. This puts the country higher than neighboring Japan and on par with France.

But with the recent political scandal and impeachment, there have been concerns that Korea’s credit score will be lowered. If the unrest and leadership vacuum continues, Korean stock could be further undervalued and the government will have trouble securing foreign exchange stabilization bonds. These bonds help stabilize the foreign exchange rate by using a spread set higher than other nations with similar credit ratings, thus leading to smaller demand for government-issued bonds.

To prevent such a situation from happening, Korean government officials have been traveling abroad since the start of the new year to ease the concerns of foreign investors.

On Sunday, Hwang Kun-il, director general of the Finance Ministry’s international financial policy bureau, left for London to attend an investors’ meeting on stabilization bonds. The Korean government plans to issue $1 billion worth of stabilization bonds with a 10-year maturity next week. Market experts expect the spread to be around 0.4 to 0.5 percentage points higher than the United States’ 10-year Treasury of 2.7895 percent.

If foreign investors are not comfortable with Korea’s current situation, the spread could rise higher.

“There has been precedent in which the nation’s credit score was affected after the issuance of bonds was postponed, such as in 2006 when North Korea conducted a nuclear test and the 2008 global financial crisis,” a brokerage firm official said.

Some market analysts say the recent exposure of corruption between government and business offers both a crisis and opportunity for Korea’s corporate world.

In a report released last month, Kwon Young-sun, a Hong Kong-based analyst at Nomura Securities, noted that President Park’s impeachment resulted from lack of transparency in the government’s bureaucracy, adding that the scandal revealed Korean companies’ weakness in the face of political pressure. Kwon said the illegal influence wielded by the president has widened the Korea discount.

“The social cost of corruption is estimated to be equivalent to 3 to 5 percent of the nation’s gross domestic product,” said Park Jeong-woo, an analyst at Korea Investment and Securities. “Corruption not only has a negative influence on fiscal policies but also damages the independence of monetary policy. The more corrupt a country is, the more unstable inflation becomes.”

Park said that if Korean society could learn from the scandal and better tackle corruption and poor corporate practices, it would contribute to further improving the nation’s economic growth in the long run.

And since Jan. 5, the overall market capitalization of foreign investors has been breaking new records. As of Wednesday, it amounted to over 479 trillion won, accounting for 35.7 percent of all stock on the Kospi.

Some analysts attribute the continued purchases to a weak euro. In the past, the euro would appreciate along with the dollar, but this time, the euro has remained weak, even as the dollar continues to strengthen. European investors have been left with little reason to sell off their holdings in the Korean market.

Another reason could be investors’ improved expectations for Korean companies’ performance. Last week, Samsung Electronics, the nation’s biggest conglomerate, reported an earnings surprise, with fourth-quarter operating profit amounting to 9.2 trillion won despite its exploding Galaxy Note7 fiasco in October. It was the company’s largest quarterly operating profit in three years.

One of the biggest contributors to such performance was the depreciation of the Korean won against the U.S. dollar. Other major exporters like Hyundai Motor are expected to benefit as well. “There’s positive sentiment over the operating profit projection as we enter the season of companies announcing their fourth-quarter performance reports,” said Lee Jun-hee, an analyst at NH Investment & Securities.