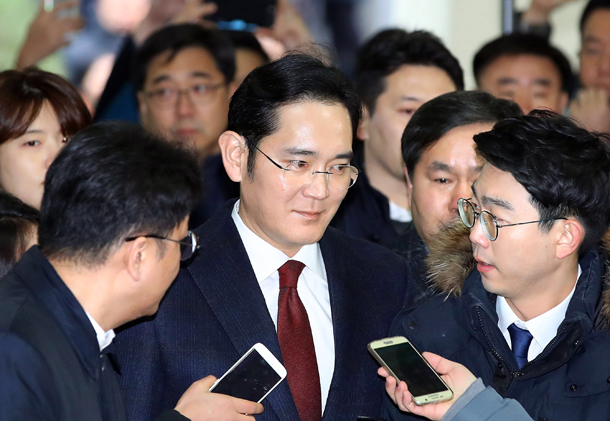 Vice Chairman of Samsung Electronics Lee Jae-yong has been questioned by both the National Assembly and an independent counsel over charges that Samsung made donations so the National Pension Service would approve a merger of Samsung C&T and Cheil Industries. [OH JONG-TAEK]

I enjoy the EBS TV program “There is No Bad Dog.” On housetraining tips, it advises snacks should be given to puppies on potty pads. They must be comfortable with the pad first to relieve themselves. Training them to sit on your command requires the same consistency as housetraining. Reward them with a snack when they sit while playing to make them sit upon command. Scolding or hitting won’t help in housetraining.

Those tips can be applied to economic policymakers, as well. Policymakers should design policies to encourage and direct enterprises and individuals. But this is not the case with our authorities. Policies inflicted on large corporations are entirely designed to force them to do things.
The former opposition leader and aspiring presidential candidate Moon Jae-in announced his ideas to reform the chaebol. It was a list of every possible regulation to constrain them. It also suggested that corporate boards include a member named by a labor union. Critics of chaebol claim that all government policies have failed because they were not tough enough. I disagree. They failed because there were too many and they were too harsh. That is why chaebol try to circumvent and override them.

It is true that chaebol often commit wrongs. Samsung Group is no exception. Of course, Samsung could have been strong-armed to make donations to funds created by Choi Soon-sil, the president’s controversial friend. Still, the swap ratio of one Samsung C&T stock for 0.35 Cheil Industries share in an all-stock merger was fair for Samsung C&T shareholders. Samsung claimed that the ratio was based on legitimate calculations. Still, a corporate entity as big as Samsung should not do things totally based on legal grounds.

Upon confirming a jail sentence for Chey Tae-won, chairman of the third-largest local conglomerate SK, the court discounted SK’s reasoning that the exchange of his stock in Walker Hill Hotel to SK Holding shares had been legitimate. The judge said that a non-legal appraisal value also should have been counted. As the judge now sits as a Samsung president, Samsung should have known better — that more value should have been added to Samsung C&T in the stock exchange deal.

The merger would have been less controversial if Samsung took the advice of a 1:046 merger ratio from an outside group that advises the National Pension Fund in its exercise of voting rights. If Samsung had taken that advice, Lee Jae-yong’s stake-holding in the merged entity would have been reduced to 15.2 percent from the current 16.5 percent, but still he would have management control.

All chaebol excesses actually stem from dynastic successions. Bullies like Choi Soon-sil exist because of the chronic weakness of the family-run corporate establishments. Chaebol must at one time or another go through a dynastic succession to defend their owning families’ control. But laws are too strict. Inheritance tax rates amount to 65 percent. Because an owner’s stake is not that big, the business cannot stay within the family after paying the taxes. This is why they resort to illicit ways. Politicians abuse this weakness. Owners are prosecuted and then pardoned after they pledge donations and other commitments.

Chaebol enterprises should be given incentives to meet the nation’s own overriding economic goals. Easing of inheritance tax or granting of dual-class ownership could be some examples. If large companies become free from their worries about ownership, they can afford to narrow the gap with smaller companies. They could cut collusive ties with politicians. The problem is hostile public sentiment toward the chaebols. A good leader would be able to persuade the public if it is for the greater benefit.


*The author, a former editorial writer of the JoongAng Ilbo, is an adviser to the Korea Institute of Finance.