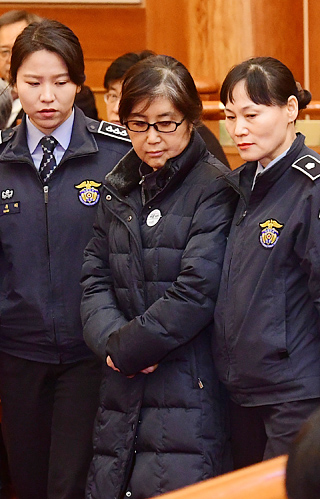 Choi Soon-sil, center, the woman at the center of the abuse of power scandal and long-time friend of President Park Geun-hye, arrives for a hearing in Park's impeachment trial at the Constitutional Court in Seoul on Monday. [JOINT PRESS CORPS]

The Constitutional Court held the fifth hearing in the impeachment trial of the president on Monday. Park was impeached in December for allowing her secret inner circle, including longtime friend Choi, to interfere in state affairs. She was also impeached for nonfeasance during the 2014 Sewol ferry sinking, in which 304 people died due to the delayed government response.

Choi, currently jailed for her own criminal trial, finally took a witness stand Monday after rejecting the court’s previous summons. Choi denied all charges against her and the president, sometimes emotionally raising her voice toward the impeachment committee.

Asked if she made visits to the Blue House by the National Assembly’s impeachment committee, which operates as the prosecution in the impeachment trial, Choi admitted that she did, but only to help Park with personal business. She refused to elaborate on the nature of the business, saying that would be an invasion of the president’s privacy.

She also denied strongly that she benefited from her ties to the president. The prosecution indicted her last year on charges of coercing conglomerates to make massive donations to two nonprofit foundations that she practically controlled. At the time, the prosecutors also said Park was Choi’s co-conspirator, but did not charge her with any crime because she enjoys presidential immunity.

When the impeachment committee asked her questions based on the prosecution’s earlier investigation, Choi said she was strong-armed during the questioning. “I feel like almost dying,” she said. “I received an extremely coercive investigation.”

“I have never received any special benefits or treatment from the government,” Choi said. “The president is also not such a person.”

Choi even asked the impeachment committee to specifically say what benefits she had earned in her dealings with the president. She insisted that the cultural and sports foundations were legitimate projects.

Choi, then, refused all the corruption charges against her and the president. She said Ko Young-tae, a former business associate who parted bitterly with her a few years ago, fabricated all the charges about her coercing conglomerates to donate to the foundations. “Ko’s testimony is not reliable,” Choi said. “He premediated everything. I don’t want to answer anything about his claims,” Choi said.

Choi also denied charges that she had unauthorized access to classified Blue House documents. She said she had revised Park’s speeches, but never saw confidential documents, particularly those on appointments of top officials in the Park administration.

While she maintained an extremely confrontational and aggressive attitude throughout the morning of questioning by the impeachment committee, she became calm in the afternoon as Park’s lawyers questioned her.