Kwon reflects on the road to Tianjin

Kwon reflects on the road to Tianjin 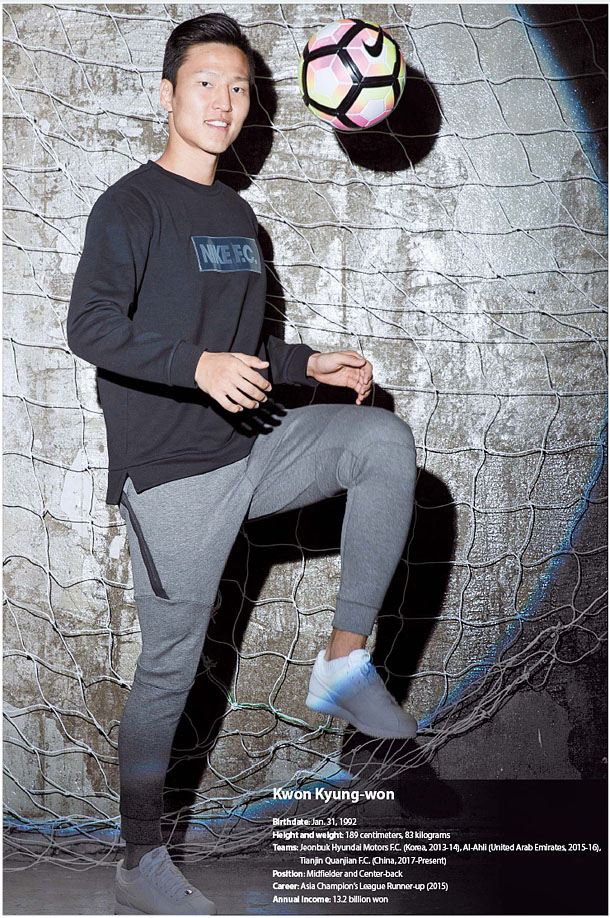 Kwon Kyung-won, 25, is midfielder for the Tianjin Quanjian F.C. in the Chinese Super League. Although Kwon debuted as a pro for Jeonbuk Hyundai Motors F.C., he was virtually unknown then - a bench-warmer for Jeonbuk with an annual income of 30 million won ($25,470). Four years later, Kwon has reversed his fortune.

While Al-Ahli Dubai F.C. was runner-up in the Asian Champion’s League in 2015, Kwon acted as a bunker-buster against the entrenched defense while also being chosen in the best eleven. The potential of such a player caught the eye of the Chinese pro football team Tianjin. The transfer fee alone was $11 million.

When compatriot Son Heung-min moved from Bayer 04 Leverkusen, 9th in the Bundesliga, to Tottenham Hotspur F.C., 2nd in the Premier League, Son had a record transfer fee of 30 million euros ($32 million). Kwon’s transfer fee is second only to Son’s. Within five years, Kwon’s annual income was 120 times larger, or $3 million.

Kwon agreed to an interview on Jan. 10 before leaving for Tianjin. “My first paycheck from Tianjin comes at the end of this month,” said Kwon. “People around me say, ‘Must be great,’ ‘I’m jealous,’ but, personally, I have as much anxiety as I do anticipation.”

Receiving a monthly salary of 300 million won ($257,000), or 10 million won daily, it is understandable. Asking him what he would do with this money, Kwon said, “My parents will manage the money and I’ll just worry about football.”

Foreign leaders of football learned of Kwon’s merit in February 2014, during Jeonbuk’s off-season training in Brazil. Visiting the Jeonbuk camp, Brazilian Luiz Felipe Scolari, 69, the coach of Guangzhou Evergrande Taobao, saw a practice game and praised Kwon, “That player, if he was refined, he could even do well in Europe.”

Jeonbuk arranged for an off-season training camp in Dubai in 2015, including a practice match between Al-Ahli. When the match finished, the coach of Al-Ahli, Cosmin Olaroiu, said, “He’s a player we definitely need on our team,” and asked for the transfer. The quoted transfer fee was $3 million.

Kwon enthusiastically played for Al-Ahli. At this time, Fabio Cannavaro, who had played for and coached Al-Ahli before, took notice of Kwon. After grasping the baton for Tianjin last year, Cannavaro wanted to take the athlete that had caught his fancy. That was how Kwon came to wear the Tianjin uniform.

Kwon didn’t realize this goal solely by himself. His family’s sacrifices and support helped him. His father, Kwon Sang-jo, was a cabbie, and his mother, Lee Mi-suk, worked at a restaurant and supported Kwon and his Taekwondo athlete older brother, Kwon Un-yeong.

But after his mother was in a car accident, life became harder. It became difficult to support two sons in sports, and a decision was made. Kwon’s older brother, Un-yeong, decided to lay down his taekwondo uniform.

Kwon recalls, “Although I was young, my older brother told our mom, ‘It’s okay, even if I have to live in a container box, let’s make sure Kyung-won gets to play as much football as he wants.’”

Even in difficult circumstances, Kwon attended an overseas Brazilian football camp for a year. It was an opportunity that would open his eyes to another level of football. During his days at Dong-A University, he built up his endurance by running mountain paths. The coach of Jeonbuk, Choi Kang-hee, said, “There isn’t anybody on the team that can match Kyung-won.”

“When coming home after completing my exercises, my heart was heavy,” Kwon said. “My mother being injured, my older brother quitting [taekwondo], my father always working night and day, I thought it was all because of me. I persevered, thinking, ‘I have to succeed.’”

After Kwon joined Al-Ahli, his older brother quit his company and devoted himself to the family. Discussing this with their parents, the family met and decided to live together. “If my family is by my side, they’re a [source] of strength to me,” said Kwon. “The plan is to be together as a family in Tianjin, as well. I guess we’ll have to diligently study Chinese.”

There is still one thing a Kwon has yet to do - bear the flag of his country on his chest.

“There’s still much I want to do,” he said. “I have to methodically prepare without being selfish.”

Kwon will have the opportunity to qualify during the Russia World Cup final qualifier rounds.