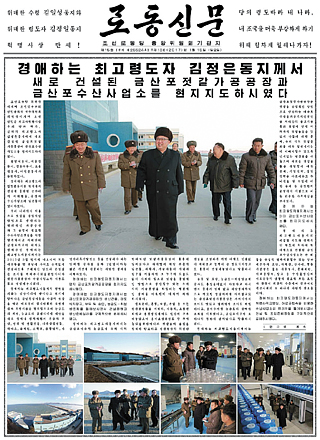 North Korea’s latest propaganda maneuver: adding more job titles to Kim Jong-un’s name in state media, a small but conspicuous change that has been witnessed in the official Rodong Sinmun from the start of 2017.

Kim is now as “chairman of the Workers’ Party of Korea, chairman of the DPRK State Affairs Commission, supreme commander of the Korean People’s Army” and most recently, also “supreme leader of our party, nation and military.”

“DPRK” is an acronym of the North’s official name, Democratic People’s Republic of Korea.

In a front-page article published last Sunday, which mentioned Kim’s visit to the newly-built Kumsanpho Fish Pickling Factory and Kumsanpho Fishery Station in Hwanghae Province, the paper allotted 59 Korean letters on Kim’s first mention, writing only 32 on what he actually did there.

This marks another effort by the North to glorify Kim, who took the helm of the country after his father, Kim Jong-il, died in December 2012. In a recent report, the South’s Ministry of Unification predicted that the communist regime will likely boost all efforts to idolize the leader in time for the fifth anniversary of his rise to power.

Last week, the North reported through its official broadcaster, the Korean Central News Agency, that it will erect three new monuments of Kim Jong-un, his father Kim Jong-il, and grandfather Kim Il Sung, on the iconic Mount Paektu, which borders China, another move to highlight the lineage.

But considering what is going on within its own borders, local pundits doubt that Pyongyang will be able to completely wash out any hints of internal turmoil this year. Kim Jong-un’s younger sister, Kim Yo-jung, was recently added onto Washington’s sanctions list for her links to the regime’s human rights abuses and censorship.

Thae Yong-ho, a former North Korean diplomat who served as deputy ambassador in London, the No. 2 position at the North Korean embassy, made his way to the South last summer and vowed to “surrender” himself to the South Korean government, saying he would use his knowledge and experience to contribute to inter-Korean reunification.

He is now all over South Korean media, making headlines for leaking confidential data from Pyongyang.

A South Korean government official, who spoke on the condition of anonymity, said Thae was likely to have key information about the Kim dynasty, which would be an enormous advantage for intelligence authorities here.

On another front, it’s still a mystery who exactly Kim Jong-un’s mother is, since Pyongyang never made any official announcements on the matter. Ko Yong-hui is the strongest candidate so far, the third wife of Kim Jong-il, who never appeared at any public events in the North and died in Paris in 2004 at the age of 52 of suspected breast cancer.

South Korean pundits claim Pyongyang is trying to hide the leader’s traces to his birthmother because her father was born on Jeju Island and later went to Osaka, Japan, to work at a factory producing military apparel for Japanese soldiers.

Kim Kwang-jin, a research fellow at the Institute for National Security Strategy, said Kim Jong-un’s maternal grandfather had a contrasting history with Kim Il Sung, his paternal grandfather, who in the North is credited with leading guerrilla forces against the Japanese imperial army.

“This is a guy who made military uniforms for the Japanese army,” said the researcher, adding that his Jeju roots would indicate Kim Jong-un isn’t purely North Korean, information that could be subject to ridicule by his own people.