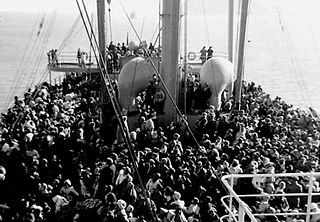 Lee Kyung-pil is better known by his nickname “Kimchi 5.” He was born on Dec. 25, 1950, in the middle of the Korean War, aboard a cargo ship near Jangseungpo Harbor in Geoje Island. His parents had fled from North Korea, and his family’s story is similar to that of Moon Jae-in, the likely presidential front-runner of the opposition party.

In October 1950, South Korean forces broke through the 38th parallel and reached the Amnok River. Then, the Chinese army intervened, and the situation reversed. As the American and South Korean forces retreated to Heungnam Port in the East Sea, refugees gathered at the wharf. The climax of the escape was the SS Meredith Victory, the cargo freighter featured in the movie “Ode to My Father.”

The ship sailed south on Dec. 23 with 14,000 refugees aboard. During the three-day journey, five babies were born, and the crew members nicknamed them “Kimchi 1,” “Kimchi 2” and so on. Lee Kyung-pil was the last baby born on the ship, on Christmas Day. Each refugee has a dramatic story. Moon Jae-in’s parents came to Geoje Island aboard the USS LST.

The SS Meredith Victory epic was a miracle made possible by Capt. Leonard LaRue, Lt. Gen. Edward Almond, Col. Edward Forney and Korean interpreter Hyun Bong-hak. Hyun desperately pleaded for the transfer of as many civilians as possible, arguing that they would be massacred if they remained in the North. After the ship’s cargo was thrown away, the refugees were allowed to board.

In late December, a statue of Dr. Hyun Bong-hak, a graduate of Severance Medical School, was unveiled. At the ceremony attended by U.S. Ambassador Mark Lippert, Moon Jae-in delivered an address. “Among the refugees from Heungnam Port were my parents and sister.

Without the dedication of Dr. Hyun, 100,000 refugees who hoped to escape communist rule in the North wouldn’t have been able to come to South Korea. I was born on Geoje Island in January 1953.
“Without Dr. Hyun, I wouldn’t have been born,” Moon said.
Moon’s story was powerful thanks to the power of facts. But some refugees showed a lukewarm reaction. One of them, Lee Ki-yeol, said, “It was an impressive speech, but something was missing. The descendants of Almond and Forney were in attendance, but Moon did not express gratitude to them sufficiently. He didn’t address the humanitarian generosity of the U.S. forces enough.”

Lee Kyung-pil, the man nicknamed “Kimchi 5” said, “Dr. Hyun and Gen. Kim Bae-il made great contributions in the Heungnam evacuation. When the troops were barely retreating, the U.S. forces made the last-minute decision to take refugees on to the ship. It would have been nice if Moon added more appreciation.”

Moon’s family history is especially dramatic. In his autobiography “Destiny,” Moon wrote, “My father graduated from the prestigious Hamheung Agricultural High School and served as the agricultural section chief of Heungnam. During the short period of occupation by the UN forces from October to December 1950, he was head of the city’s agricultural department.” From North Korea’s perspective, Moon’s father was a reactionary. It is not hard to imagine what would have happened to him if he hadn’t gone on board the U.S. vessel.

Kimchi 5 is a veterinarian and runs the Peace Animal Hospital. His father opened a Peace Photo Studio and Peace Store. “My father remained in Geoje and was obsessed with peace and giving back. He denounced war.”

Ten years ago, I investigated Kimchi 5’s story and wrote about his life in the JoongAng Ilbo. Then, we went to look for “Kimchi 1,” Son Yang-young. He was in the export business. The reunion of Kimchi 1 and Kimchi 5 was reserved and poignant. The two looked toward the North from a pavilion in Paju, just across the border. “When Korea becomes rich and powerful, we can attain righteous peace, not a humiliating one. When the Korea-U.S. alliance is shaken, China and Japan will look down on Korea.” They were strongly convinced.

The Northeast Asian order is in tension. Moon Jae-in has an ambiguous position on deployment of the Terminal High Altitude Area Defense system, or Thaad. He said the next administration must decide the missile defense system’s fate with the National Assembly, taking the agreement with Washington into consideration but not limited by it. The stance reminds me of the naval base in Jeju. The base was completed a year ago and is in operation. It was President Roh Moo-hyun’s decision to build it, and Moon was his chief of staff. But later, Moon opposed it, saying it started off on the wrong foot.

The Jeju base now tracks Chinese and Japanese vessels, and its detection capacity is extraordinary. It is President Roh’s greatest achievement. He said, “Without power, peace cannot be maintained.”

Roh’s “peace through armament” stance was glorious, but what about Moon Jae-in? Is he still against the Jeju base, or has he retracted his opposition?

The banner of Thaad is peace through armament. Moon Jae-in wants such an important decision to go through sufficient public discussion. Public discussion is very important, but it could be a way to avoid a controversial topic. That is a waste of leadership. As security is all about decision-making, it calls for clear leadership.


*The author is a senior columnist for the JoongAng Ilbo.