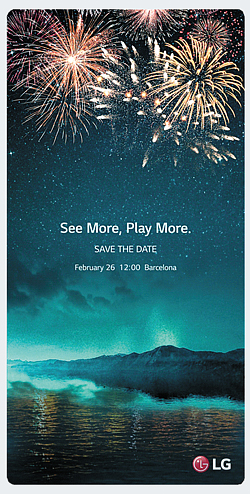 LG Electronics sent out a media invitation to the unveiling of its flagship G6 smartphone with the tagline “See More, Play More” on Thursday, suggesting that the upcoming model will focus on entertainment features.

The launch event will take place in Barcelona, Spain, on Feb. 26, one day before the Mobile World Congress kicks off in the Mediterranean city. The company unveiled its last flagship model, the G5, a day before the show began last year as well.

The email invitation includes an animated image of fireworks shooting into the sky. As the fireworks go off, the size of the screen expands vertically to a ratio of 18:9, suggesting the phone will have the same screen size.

The tagline “See More, Play More” is a riff from the G5’s slogan, “Life’s Good When You Play More,” under which the phone was marketed as a “theme park in your pocket.” Unlike the G5, though, the G6 will lose the modular concept.

LG has already made public that its new flagship phone will come with after-sales service based on artificial intelligence and a heat pipe to prevent overheating. According to various sources, the G6 will likely use Google Assistant, a Siri-like voice assistant that Google announced in May.

Both LG and Google have refused to confirm the speculation, but the addition of a cutting-edge voice assistant may propel LG’s standing in the United States, one of its key markets, and provide an edge against rival Samsung Electronics. Its upcoming Galaxy S8 is known to have a patented voice assistant called Bixby that was developed after its acquisition of Viv Labs, an artificial intelligence start-up founded by the developers of Siri.

A voice-activated personal assistant called Google Now is currently available as an Android and iOS app. Google Assistant, on the other hand, can be found in Google’s Allo chat app and integrated into Google Home and Google’s Pixel phones. Experts predict the two platforms will eventually merge into one in the near future.

Google, though, has yet to unveil a Korean-language version of Google Assistant, and it remains to be seen what LG will do to localize the tool.

LG already has a patent on Q Voice, a voice recognition technology that it installed on its 2012 smartphone Optimus Q. But it isn’t likely the technology will be merged with Google Assistant.