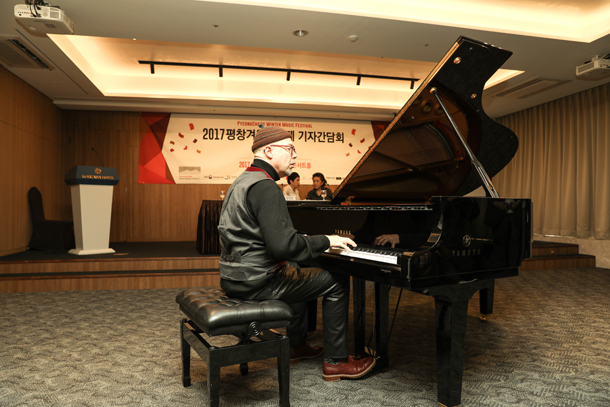 Jazz pianist John Beasley, plays an improvisation piece during the press conference for the upcoming 2017 Pyeongchang Winter Music Festival on Thursday at the Koreana Hotel in central Seoul. [PRM]

Classical music usually resonates through the mountains of Pyeongchang during the scorching hot summer. But since last year, organizers of the Great Mountains Music Festival have been holding a winter edition of the music festival in an attempt to put Pyeongchang in the spotlight prior to the 2018 Winter Olympics.

Marking the 2nd PyeongChang Winter Music Festival, the artistic directors Chung Myung-wha and Chung Kyung-wha announced Thursday that this year’s festival kicks off on Feb. 15 for five days with programs that feature a mix of jazz and classical music.

“Unlike the Great Mountains International Music & School Festival we’ve organized every summer for more than 10 years, this winter music festival focuses on showing a parade of performances by younger musicians who haven’t been on our music festival stages yet,” said Kyung-wha. “Moreover, the focus is also on collaborating more actively with other genres of music like jazz.”

Grammy-nominated jazz pianist John Beasley has been invited to perform four concerts over the five days. He’ll be offering music from Thelonious Monk, the immortal jazz figure whose 100th birthday is being celebrated around the world this year. He will also perform alongside Rolling Stones bassist Darryl Jones and Korean jazz singer Woong San.

“My latest project is called the ‘Monk’estra,’ which is a hybrid name for Monk and a jazz orchestra, composed of 17 ensemble members, will stage a jazz concert on Feb. 16,” said Beasley who visited Seoul for the press conference held on Thursday in central Seoul. “With Jones, we have more of an urban funk jazz approach to the music so we hope everybody can come and move their body and dance along, after their long day on the slopes.”

Beasley will also show a combination of jazz from the bebop era as well as his solo piano pieces, in which he’ll play some jazz standards and original pieces while improvising melodies and moves on the spot as well.

“I think it’s very important to know that jazz is what Miles Davies called a social music. We had a conversation on stage and with the audience as well… Jazz is very much about being in the moment and interpreting these feelings,” he added.

Cellist Myung-wha will also be staging a rare collaboration. She’ll be playing her cello next to pansori (traditional narrative singing often described as traditional Korean opera) master Ahn Sook-sun. The two artists will perform “Sarang-ga,” or a “Love Song” in the famous pansori work “The Tale of Chunhyang.”

“Cello meets pansori as if the two protagonists in the story - Chunhyang and Mongryong - are conversing,” said Myung-wha. “It has a very lyrical melody and it will be a fresh performance for both pansori and classical music fans.”