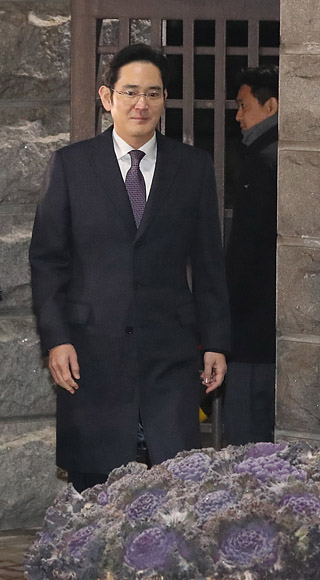 An independent counsel said Thursday it will not be deterred by a local court’s rejection of a warrant to detain Samsung leader Lee Jae-yong as a suspect in their investigation into his alleged bribing of President Park Geun-hye.

It said it still plans to question Park in person very soon.

“It is extremely regretful,” said assistant independent counsel Lee Kyu-chul in a press briefing after the Seoul Central District Court denied the investigators’ request to detain Lee for further questioning. Independent counsel Park Young-soo asked the court on Monday to issue a warrant to detain the vice chairman of Samsung Electronics on charges of bribing President Park through her controversial friend Choi Soon-sil in return for government support of a merger of two Samsung units. Lee was also accused of embezzlement and perjury.

The court held a warrant hearing Wednesday and Judge Cho Eui-yeon deliberated for 18 hours to decide the immediate fate of the tycoon, accused of offering 43 billion won ($36.4 million) in bribes in return for the president’s influence over a state-run pension fund, which voted for the merger that solidified Lee’s control over Samsung Group. Cho announced his decision to reject the warrant request around 5 a.m. Thursday.

Lee’s lawyers argued that he is a victim, not a suspect, because the president coerced Lee into offering generous sponsorship of Choi’s daughter and massive donations to two nonprofit foundations that Choi controlled.

“I believe there was a difference in legal assessments between the court and the independent counsel on the suspect’s charges,” Assistant Independent Counsel Lee said. “We will take all necessary measures to unwaveringly proceed with the investigation.”

Samsung said it is fortunate that Lee will go through the investigation without being locked up. It reiterated that the donations in question were not given in return for support for the merger.

Judge Cho, who presided over the warrant hearing, issued an unusually lengthy statement on his reason of turning down the request. He questioned the need and the validity of the independent counsel’s arguments to detain Lee as a bribery suspect. The judge said there was a possibility of legal controversy in defining the nature of Samsung’s support for Choi as bribes.

In an ordinary warrant hearing, a judge considers the possibility of evidence destruction or a flight risk as the most important factors.

Judge Cho has a history of striking down requests by prosecutors to detain tycoons. He turned down warrant requests to detain Lotte Chairman Shin Dong-bin; Park Dong-hoon, former CEO of Volkswagen Korea; and John Lee, former head of Oxy Reckitt Benckiser. In all of those cases, Cho rejected the prosecutors’ contention of probable cause to detain the tycoons.

Reflecting its shock, the independent counsel only took one minute to respond to the court’s rejection in the morning. After an emergency meeting, assistant counsel Lee had another briefing in the afternoon and stressed the team’s undeterred will to go after the president, Choi and other conglomerates. Fifty-three companies paid a total of 77.4 billion won to two foundations that Choi controlled.

He said the independent counsel has no change in its plan to conduct a face-to-face questioning of President Park in early February in court or elsewhere. He also dismissed criticism that it was premature to seek a detention warrant for Samsung’s Lee before questioning Park.

“Because the questioning of the president is not possible at this moment, I don’t think it is inappropriate to say that we acted prematurely,” he said.

The independent counsel will summon Choi next week and question her first, he added.

Samsung’s lawyers told the court Lee should not be a bribery suspect but should be considered a victim of Park’s coercion. Asked by journalists if Lee’s lawyers argued in the court that he felt pressure or was threatened by Park to the degree of feeling fear, assistant counsel Lee said, “It is my understanding that they did.”

The independent counsel team does not buy that argument. Asked if Lee said he felt a threat to his safety, the assistant counsel refused to answer.

Despite concerns that the independent counsel is running out of time, Lee said no decision has been made to extend the probe’s deadline. The team’s mandate expires on Feb. 28, 2017, but it can ask for a 30-day extension.

Legal analysts said the court’s decision to turn down the request to detain Lee will not have a big impact on Park’s impeachment trial. Because the bribery charge is one of the main grounds for impeachment, concerns were raised that the Constitutional Court may see the warrant rejection as the independent counsel’s failure to prove the bribery charge.

Analysts said the National Assembly listed nine violations of the Constitution and criminal laws, and bribery charges are only a part of them. The court has categorized the charges into five themes, including allowing a secret inner circle to influence state affairs and infringement of the presidential duty to protect the citizens’ lives during the Sewol ferry’s sinking in 2014.

The court has also stressed that an impeachment trial is different from a criminal trial and that it will rule on the case independent of other criminal cases currently ongoing.