Creating shades fit for a Joseon king: Artisans across many fields of handicraft came together to create traditional blinds

Creating shades fit for a Joseon king: Artisans across many fields of handicraft came together to create traditional blinds 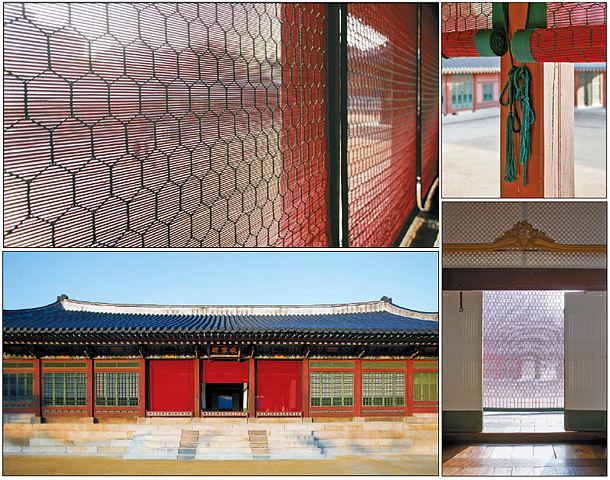 Clockwise from top: The traditional wooden blinds have been newly installed at the bed chamber at Deoksu Palace, known as Hamnyeong; The creation of the blinds involved various artisans including those in the area of traditional knots; From the inside people can see outside, but from the outside the inside is not readily seen, allowing privacy; The three blinds are not only pretty to look at, but with their lacquered surface, the blinds are designed to be resistant to water, dampness and insects to a certain degree.

The Hamnyeong building of Deoksu Palace in central Seoul - which was the sleeping chamber for Korean kings and queens in the final years of the Joseon Dynasty (1392-1910) - recently got new blinds.

Some may say “what’s special about blinds?”

But apparently, the making of traditional wooden blinds, known as juryeom, requires a lot of work.

First, you slice a bamboo tree into thin sticks and dry them for 20 days. And then you apply color and lacquer to make sure the blinds are resistant to water, dampness and insects. Then, with threads dyed with the appropriate color, you weave the bamboo sticks. As you weave you make turtle-shell patterns. You finish it off by sewing watermelon-colored fabric on its borders.

It takes a team of highly-skilled workers to make these blinds. Members for the project included master artisans in the areas of traditional wooden blinds; lacquerware inlaid with mother-of-pearl; traditional knots; as well as those in related fields of wood, paper and brassware.

The installation of three of these blinds took place on Dec. 20, adding grace and color to the structure.

Interestingly the new blinds, each measuring 2.9 meters (9.6 feet) by 3.2 meters, are designed so that people inside the Hamnyeong building, also known as Hamnyeongjeon Hall, can see outside, whereas from the outside people cannot view the inside.

The artisans referred to various historical records to make the blinds.

Thanks to Korean uigwe, or the books that detail in text and drawings protocols for various events at the royal court of Joseon, the artisans could recreate the blinds. A 1784 uigwe documents how they made juryeom in detail. Artisans also referred to some artifacts at the National Palace Museum of Korea.

According to historical records, juryeom was used in structures at royal palaces, but an additional number of such blinds were installed for special occasions at the royal court. The color red represents royalty. And the installment of the red blinds was crucial in royal protocol. The blinds were also used outside the court, during the king’s procession.

Arumjigi Culture Keepers Foundation, which financed and organized the project with its corporate sponsor Hermes, said, this is part of its larger scheme of helping the storied structure of Hamnyeongjeon Hall, find its original glory.

“It’s part of recreating the traditional production of furnishings inside Hamnyeongjeon Hall,” Shin Hye-sun, one of Arumjigi’s publicists, said. She noted that since 2015, artisans have refurbished the traditional heating and flooring as well as curtains.

According to the officials of Arumjigi Culture Keepers Foundation, the project will continue at Deoksu Palace this year and hopefully expand to other palaces next year. Details, however, have yet to be disclosed.

Asked why they chose Deoksu for the first phase of the project, officials said that they chose the palace because it is accessible to people in downtown Seoul. Its size, relatively smaller compared to others, is also what made Deoksu appropriate.