Basketball and volleyball are the main winter sports. Although basketball was introduced to Korean fans a lot earlier than volleyball, when it comes to crowd attendance and broadcasting ratings, they are rivals. But when the two all-star games were scheduled on the same day, it came down to a matter of sheer entertainment value. 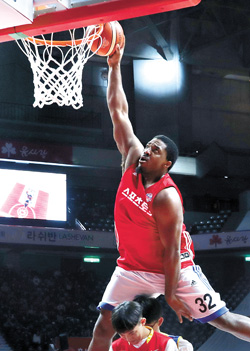 Michael Craig dunks during the dunk contest at the all-star game. [YANG GWANG-SAM]

For the first time, the pro basketball all-star game was held in Busan, also known as “Baseball City.”

For this year’s all-star game, senior and junior teams were divided based on the years in which players were born. Michael Craig of the Seoul Samsung Thunders added more interest to the game as he gave an outstanding dunk performance during the dunk contest.

Oh Se-keun of Anyang KGC was the MVP, scoring 29 points.

Players playing in the all-star game rode the same KTX train as fans traveling down to watch them play.

“All-star volleyball is more popular because female players play in it,” Oh said. “But this year, I think we were as popular as the volleyball all-star game.” 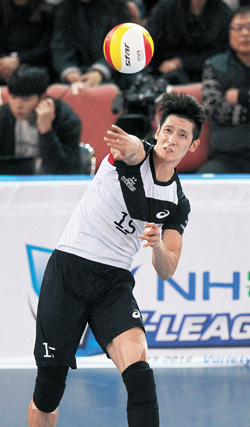 There was total attendance of 5,033 people at the Yu Gwan-sun Gym in Cheonan, South Chungcheong. The court was half the size of a basketball all-star court, as the gym itself was smaller, which made the fans feel like they were attending a prestigious private event.

“I feel like a VIP because the tickets were so hard to get,” said one fan who waited since 7 a.m. to buy a ticket. Unlike other sports, volleyball all-star teams include both men and women.

Moon Sung-min of Cheonan Hyundai Capital won the spike king contest with a record speed of 123 kilometers per hour (76 miles per hour).

“I surfed through the internet a lot looking for ceremonial dances,” Jeon said. “I think volleyball all-star is more fun to watch than the basketball all-star game.”