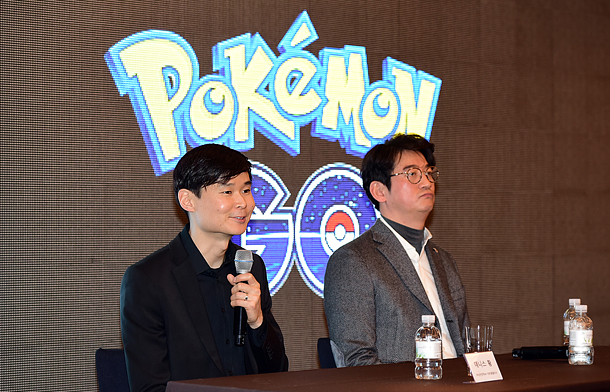 Dennis Hwang, director of visual and interaction design at Niantic, left, and Lim Jai-boem, CEO of Pokemon Korea, announce the release of Pokemon Go in Korea at the Westin Chosun Hotel in central Seoul on Tuesday. [NIANTIC]

Six months after the augmented reality game Pokemon Go took the world by storm, the smartphone game that sends players out into the real world to “catch ‘em all” was finally released in Korea on Tuesday, but there was no answer as to what map data the game was using, a question that has long bugged observers here.

Pokemon Go heavily relies on map data for its navigational functions. In other countries, the game, which was made by Google spin-off Nantic, uses Google Maps, but in Korea, the government has denied the American tech giant access to detailed map data, citing geopolitical security concerns.

Niantic on Tuesday would not say what map data Pokemon Go was using in Korea and denied speculation that the Google Map issue delayed the game’s release here. 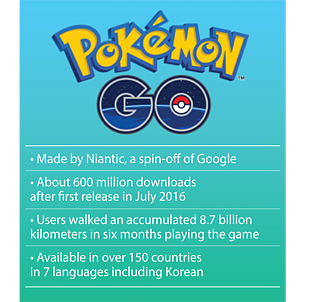 “I cannot tell you details regarding our map apart from the fact that we combined publicly accessible map data to enable our service,” Dennis Hwang, director of visual and interaction design at Niantic, said during a press briefing in Seoul. Hwang, as the only Korean-American on the game development team, has been a main speaker for the company in Korea.

Hwang added that Niantic had been “putting effort” into the map with consideration for Korea’s geopolitical circumstances, adding that the company would “respond quickly” if any problems related to leaks of military locations or user safety arise.

On the reason for the delayed release, Hwang said, “We are still a small start-up with few staff, and it took some time for us to respond to the bigger-than-expected popularity of the game around the world. This includes preparing for Korean translation and services.”

Hwang briefly hinted at the possibility of service releases unique to Korea, insisting the country “is a very important market to Niantic as it is filled with passionate game players.”

“We are in discussion with various companies in Korea,” Hwang said. “Niantic is more catered to providing global services, but we are not ruling out chances of offering specialized services for Korea.” In the United States and Japan, Pokemon Go has been collaborating with companies like Starbucks and McDonald’s to provide users with a diverse range of gaming experiences at shops.

The success of the app in Korea is yet to be seen. Despite notching 600 million downloads worldwide in the six months since its release, interest in the game has been shrinking with the onset of winter. The cold weather has kept users away from walking the streets to play the game.

The game’s launch in Korea has also been shaky, with multiple errors reported, including Android users saying they had trouble downloading the app and others reporting the game’s failure to detect a GPS signal. “We have heard about the problems, and all reports will be accumulated to be sent to our headquarters in San Francisco for feedback,” a company spokesperson said.

The game maker remains positive about Pokemon Go’s prospects in Korea. Niantic said it plans to add a new generation of Pokemon characters to the game along with new functions and events for players to enjoy more variety.