Dodger’s Ryu is ready to return to the mound

Dodger’s Ryu is ready to return to the mound 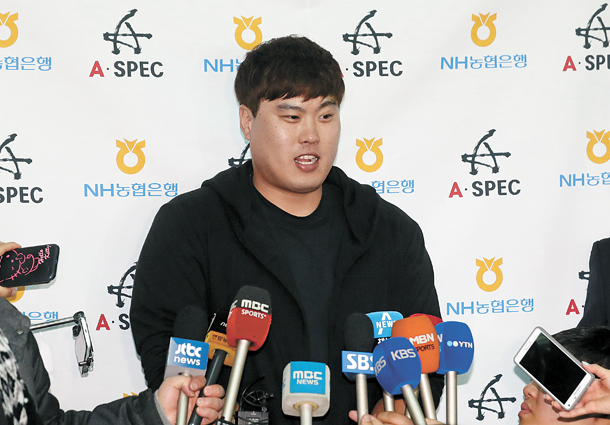 Ryu Hyun-jin of the Los Angeles Dodgers poses for pictures at Incheon International Airport before departing for the United States on Jan. 25, 2017. [YONHAP]

Following two surgeries that limited him to one start over the past two years, Los Angeles Dodgers left-hander Ryu Hyun-jin said Wednesday he’s pain-free and ready to take the mound again.

Ryu departed for the United States after preparing for the new season in Korea and Japan. He said he’s put in plenty of work on the mound and is ready to hit the ground running when the Dodgers’ camp opens in mid-February.

“Right now, I’d say I am in better shape than I normally would be at the start of spring training,” Ryu told reporters at Incheon International Airport. “I threw four bullpen sessions a day while training in Japan. I have no pain at the moment.”

Ryu, who made his big league debut in 2013, missed the entire 2015 season after a shoulder surgery in May that year. He returned to action on July 7 last year against the San Diego Padres but was touched for six earned runs on eight hits in 4 2/3 innings. That would be the only start he’d make in 2016, as lingering pain sidelined him again.

Ryu then underwent a left elbow debridement procedure in September, with hopes of joining the Dodgers’ spring training at 100 percent.

The former KBO MVP won 14 games in each of his first two major league seasons as the team’s No. 3 starter behind two Cy Young Award winners: Clayton Kershaw and Zack Greinke.’

Ryu said Wednesday if he maintains his form, he will be able to duplicate his early major league success.

“I think I have to start throwing on the mound from the very beginning of the camp,” he said. “And I think I am physically ready to do that.”

The Dodgers have an abundance of starting pitching heading into the new season. The depth chart on the club’s website lists eight starters in the rotation, with Ryu ranked seventh, behind Brandon McCarthy and ahead only of Alex Wood. Ryu said he’s used to competing for a job, having done so as a rookie in 2013, and he has the same mindset for 2017.

“First and foremost, I’ll try to win a spot in the rotation,” he said. “After that, my goal is to stay healthy and not miss a turn in the rotation and also to avoid a trip to the disabled list.”

The two players went toe-to-toe for several seasons in the Korea Baseball Organization, and if Hwang makes the 25-man roster, they will be in the same National League West division. The Dodgers and the Giants will meet 19 times in 2017.

“Hwang has been such a good player in Korea, and I think he’ll do well in the U.S. too,” Ryu said, adding that Hwang will hit for as much power as Pittsburgh Pirates infielder Kang Jung-ho, a 40-homer slugger in the KBO who has hit 36 homers in his first two major league seasons.