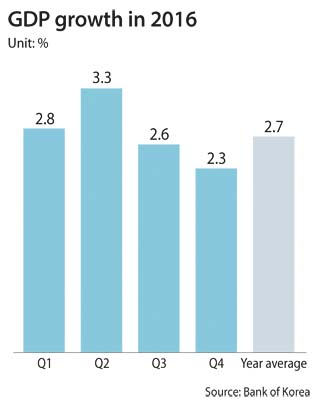 The country’s gross domestic product expanded a seasonally adjusted 0.4 percent between October and December last year compared to the previous quarter, according to preliminary data released by the Bank of Korea on Wednesday. The rate is the lowest in a year and a half, followed by the third quarter’s 0.6 percent.

Real GDP rose 2.3 percent during the fourth quarter from a year earlier.

The modest reading set 2016 GDP growth at 2.7 percent, up 0.1 percent from 2015. The annual growth rate corresponded with the central bank’s forecast, which was revised down to 2.7 percent in July.

“The biggest factor [for the decline] lies in private spending, which accounts for 49.5 percent of all GDP,” said Jeong Gyu-il, director general of the Bank of Korea’s economic statistics department. “The lower private spending offset the steep growth in investment on facilities and equipment, affecting overall economic growth.”

Private spending was up a miniscule 0.2 percent quarter on quarter, compared with the third quarter’s 0.5 percent increase.

Korea’s overall consumer sentiment fell to its lowest point in nearly eight years this month, according to the central bank’s data on Tuesday.

The Bank of Korea official also cited increasing prices in vegetables and meat, on top of existing factors including a new antigraft law and corporate restructuring that further hampered spending.

Construction investment, which drove the country’s growth through the third quarter, made a downturn in the fourth, following government regulations to tamp down a heated real estate market. Construction spending dropped 1.7 percent compared to the previous quarter.

Still, annual investment on construction in 2016 remained at 12.8 percent, the highest since 1991. The third quarter in particular posted robust growth of 3.9 percent, boosted by increased expenditure on both residential and commercial construction.