Organizing is a trend and booming business

Organizing is a trend and booming business 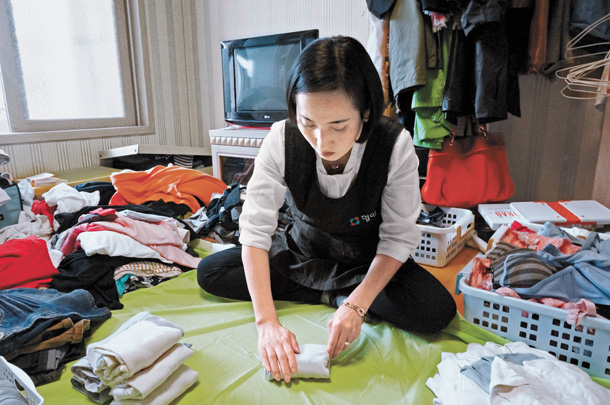 An organizing professional from Dumin tidies up household items at a house in Seoul. [DUMIN]

Since “Non-possession” by the late Buddhist monk Beopjong was published in 1976, more than 3.7 million copies of the bestselling book have been sold.

After four decades, Koreans seem to be opening their eyes to what the respected religious figure preached: a minimalist lifestyle. An increasing number of people have begun to appreciate that less is more, as the West has become fascinated with Japanese organizing guru Marie Kodo’s mega bestseller “The Life-Changing Magic of Tidying Up.”

Books about organizing and “de-cluttering” lifestyles have been flooding the market in recent years, taking up an entire corner of Kyobo Bookstore, Korea’s largest bookstore chain. Coming in white covers with empty space and neat fonts, the titles range from “The Art of Simplicity” to “Power of Organizing Room,” “The Joy of Less,” to “I Have Decided to Live a Simple Life” and “I Grew Happier as I Ditched More.”

The publications have led many readers to tidy up their own houses and to go so far as to pay to have the service done. Six years after its arrival in Korea, the “organizing industry” is taking off.

“Koreans seem to be slowly realizing that organizing and removal service can be done right by professionals,” said Yoon Sun-hyun, CEO of Very Good Organizing Company, “largely because less than 30 percent are actually able to execute from the theories they have acquired from books.”

Yoon, one of Korea’s first and most popular organizing consultants, is author of the best-seller “The Power of 15-Minutes Organizing a Day.

Joung Kyoung-ja, founder and chairwoman of the Korean Association of Professional Organizers (KAPO), says revenue for 2016 for Dumin, an organizing service company affiliated with the organization, jumped 150 percent from a year earlier to 1 billion won ($864,300). The organizing industry in Korea made around 20 billion won as of last year and is projected to grow at least 50 percent annually in the coming years, according to the association.

“The perception of organizing services has changed enormously ever since I launched the business in 2010,” she said. “Still, not many people know about it.”

Before and after a kitchen underwent an organizing service that starts with ditching excess clutter.[very good organizing company]

In the United States, the National Association of Professional Organizers has been around since 1985, about 25 years ahead of Korea. Having begun with 16 members in Los Angeles, the association now has more than 4,000 members in 22 countries, contributing to the boom of the field of professional organization.

This is how the service works. When you ring up an organizing company, it sends an organizing consultant to take a look at the size of your space and the “stuff” you have. On D Day, a team of consultants - three to six - come to work on your place. Customers are advised to stick with the organizers to tell them which items they wish to keep and which to dispose of, since chucking excess clutter accounts for a major portion of the service. The work is done when the remaining items are all tidied up.

You are charged based on the comprehensive analysis of the size of space, stuff and time needed for the service. The service for a day normally amounts up to 1 million won - multiple times the fee for house cleaning service. Some companies offer various price options proportionate to the size of the space and hours to be spent on their homepage for clients to choose.

Demand comes from a diverse demographic. Major clients are double-income couples in their 40s and 50s with little time or households with children about to enter elementary school, where a lot of toys need to be removed, according to Joung. 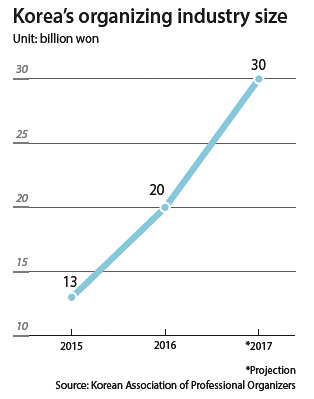 Those households with severe conflict either from loads of stuff filling a sizable portion of their space or from one of the family member’s hoarding habits also send an SOS.

“When you feel lethargic and depressed from the crammed and messy space you are in, the best way would be to go ahead to buy a bigger house and costlier furniture to refresh yourself,” Yoon said. “That is the case when you have lots of money. But not many people are as privileged. If you have a limited budget of 1 million won, I would say spending it on an organizing service would turn out to be most effective.”

What if your house is messy again in just a couple of days after the service? “The service is not meant for a single occasion but is designed for long-term maintenance,” he said.

“One of professional organizers’ main jobs is building a system that prevents the space from turning messy again.”

An organizing service can ultimately change your life, experts say.

“Customers are led into mending their lifestyle. They no longer buy, pick up or receive stuff similar stuff, now that they have learned what items they won’t use and throw away,” said Joung.

A working mom of a 5-year-old daughter surnamed Yim tried the service.

“After the organizers got rid of all the excess in my house, I grew the habit of giving a second thought before proceeding to buy something: ‘If I end up not using it, I will have to spend money to chuck it away later,’” she said, “which naturally led me to spend less money.”

When she shared her story on a large web community on household affairs, “Lemon Terrace,” on Naver, she received hundreds of inquiries about the service from people who were unaware such a service existed in Korea.

Those who train to be professional organizers are increasing too. There are an estimated 108 organizing companies in Korea that dispatch so-called organizing professionals who work like freelancers, and the number is rising, according to the KAPO. Some of the firms also run training and issue licenses, key sources of their revenue. Some 35 types of such licenses are available from private issuers, and they range from level one to two and expert level at a total cost of up to 1.5 million won. 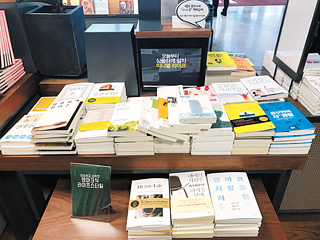 A corner at Kyobo Bookstore in Gwanghwamun, central Seoul is devoted to books about organizing and minimalist life. [SEO JI-EUN]

Since customers do not normally use the organizing service on a regular basis - unlike a house cleaning service - the organizers work only on-call. The leader of each organizing team barely makes 3 million won monthly, Yoon says.

“A lot of certificate-issuing companies lure customers into believing they can make a lot of money after quite easily obtaining the certificate,” Yoon said, “which is not true, yet.”

To rev up profitability and scale of the business for long-term growth, organizing companies are gearing up to seal a range of business-to-business deals - tying their service with interior and cleaning services, furniture companies, builders and even home appliances producers.

For instance, a builder may send organizing professionals to those moving into a new apartment for the first two months, or a white goods manufacturer may give a coupon to customers who are buying a new refrigerator to use the service so they could save time and labor - an added value to the products sold.

Joung said her company is on the verge of inking a contract with one of major consumer electronics companies for such service and is in the middle of a talk with the Korean operation of 100-yen shop franchise Daiso to develop goods that facilitate organizing. Yoon is preparing to enter China, where organizing services do not even exist.

Both experts agree that Korea is still in its infancy when it comes to the organizing business, and the perception of it will reach a matured stage in a couple of years.

“There was a time when people thought using a service for packing and unpacking a home when moving was a luxury but it is taken for granted now,” Yoon said. “I believe organizing will ultimately become as common as packing and moving service someday.”