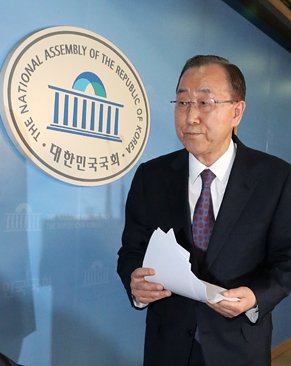 Former UN Secretary General Ban Ki-moon dropped his bid for president Wednesday, capping an end to his three-week journey to the Blue House as he has found himself facing myriad controversies and questions over his political skills and qualifications.

Standing before reporters during a hastily arranged press briefing at the National Assembly around 3 p.m., the former UN chief announced he would stop seeking to capture the country’s highest elected office while acknowledging that he had wanted to lead the nation as it is mired in a crisis with President Park Geun-hye now impeached.

“I told the people my intention was to bring about national unity because the country was deeply divided,” said the 72-year-old.

Then Ban blamed the political establishment for his decision to drop out of the race, saying, “I have found political players very selfish, whose mindsets are stuck in the past. I have come to the conclusion that it is meaningless for me to continue my path with them. Reflecting on this judgment, I decided to rescind my presidential bid.”

While Ban blamed the harsh nature of politics, there has been rising speculation that the cause may also be his declining approval rating, despite his national promotion tour.

In most polls, the lifelong diplomat remained a distant second with a nearly 20 percent approval gap between himself and frontrunner Moon Jae-in of the Democratic Party.