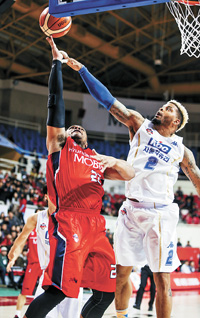 Ulsan Mobis Phoebus, who are coming out of a 79-62 victory over Jeonju KCC Egis, will travel to Seoul to take on Seoul SK Knights today.

Yang Dong-geun, Korea’s leading guard and the captain of Phoebus, returned from his injury last month. Since then, he’s been averaging 8.3 points per game. Against the Egis on Wednesday, he scored nine points while dishing out eight assists and grabbing six rebounds. Another notable player to watch for is Yang’s teammate and rookie of the year contender Lee Jong-hyun. Standing at 2.03 meters (6 feet 8 inches), the center was deemed a talent of the century. However, he was unable to find himself on the court donning the Phoebus jersey until the end of January due to his foot injury.

After scoring a meager two points during his debut match against Seoul Samsung Thunders, Lee piled in 24 points in the next game against Changwon LG Sakers, proving that he is in fact professional material. He’s been averaging 11.5 points and 9.3 rebounds so far this season in just four games.

In the past this season, the Phoebus holds the upper ground with two wins and one loss against the Knights. 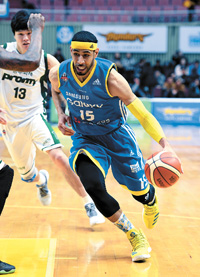 Bottom-ranked Busan KT Sonicboom will be in for a wild ride this weekend as they will have to face Seoul Samsung Thunders led by head coach Lee Sang-min.

Ricardo Ratliffe, a center out of Missouri, has been leading the Thunders with 23 points and 12.5 rebounds on average in 34 games as of Wednesday, ranked third in scoring and second in rebounds as a result. The import is also ranked second in blocks with 1.44 as of Wednesday. He is supported by Moon Tae-young, also known as Gregory Stevenson, a forward naturalized from the United States. Moon has been averaging 12.47 points, 4.5 rebounds and 1.8 assists in 32 games. They will be led by the starting point guard Kim Tae-sul. Kim, who newly joined the Thunders before this season, has been averaging 8.71 points, 2.4 rebounds and 5.5 assists in 34 games, living up to the expectations by his head coach Lee who brought him onboard despite his disappointing performance in the past few years. 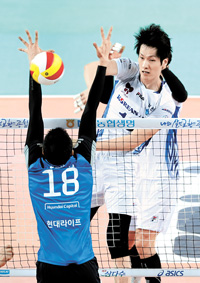 Mitja Gasparini, a wing spiker from Slovenia, has been leading the Jumbos this year. He’s scored 0.57 service points per set and accumulated 610 points so far this season. While Gasparini stands on the right side of the court, Kim Hak-min, a homegrown player, has been taking care of things on the other side, tallying 368 points throughout the season. Kim is one of four Korean players found in the top-10 rankings for scoring.

Living up to their stardom, it was Gasparini and Kim that led the team during its victory over Gumi KB Insurance Stars. During the game, the Slovenian put up 25 points on the board while Kim added 22. Both of them played the full game in the Jumbos’ 3-1 set-score win over the Stars.

Against Rush & Cash, the Jumbos have a perfect record this season with four wins and no loss.