Can we fight tonight?

Can we fight tonight? 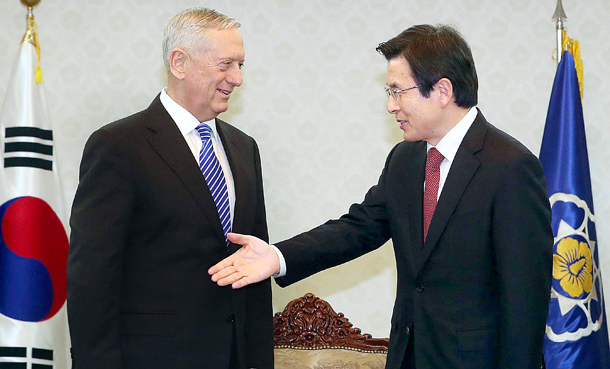 Quantico, a small town located about 60 kilometers (37 miles) southwest of Washington D.C., is known as the “Crossroads of the Marine Corps.” Located in Virginia’s Prince William County, the Marine Corps’ command, which controls 200,000 soldiers, and officer candidate school as well as a training center are in the town.

“Semper Fidelis” or “Always Faithful” is the slogan of Quantico. It is also a motto that captures the essence of the spirit of the Marine Corps, which celebrates its 242th anniversary this year.

Quantico produced James N. Mattis, the new U.S. defense secretary who came to Korea this week. After volunteering for the Marine Corps, he served the force for 45 years and retired in 2013. The retired general often said he was married to the Marine Corps. He is still single. This was why Esquire magazine used the title General Monk in its feature on Mattis. One of his associates said his room has a small bed and a bible, too humble to be the room of a four-star general.

He is particularly known for his affection for his soldiers. On his vacations, he visited every single member of the Marine Corps who were injured during missions including the war in Afghanistan. He reportedly showed tears to the families of fallen soldiers and promised that the Marine Corps would never forget them.

With strong leadership, good communication and a humble lifestyle, Mattis is remembered as one of the most respected commanders of the Marine Corps. That allowed the U.S. Congress to give an exception to the regulation that a serviceman can only serve as defense secretary at least seven years after his retirement. Only one of the 100 members of the Senate voted against the confirmation of Mattis as defense secretary.

His true character was unfamiliar to us because of his nickname, Mad Dog, dominated our first impression. The image became strong because of some of his controversial comments and radical decisions during operations.

He earned the nickname from his bold and brave operation of the 1st Division of Marine Corps in Fallujah, Iraq, in 2003. It signifies that he is ready to go “mad” when he sees an obstacle to U.S. interests or a threat to an American soldier’s life. That’s a good definition of “America First.”

When we see Korean troops, we feel extremely sad. We wonder if the top commanders of our military have such determination and readiness. Although North Korea’s Supreme Commander Kim Jong-un threatens nuclear and missile provocations and to “exterminate the South Koreans,” the military’s attitude seems lukewarm.

Although a controversy regarding the deployment of the U.S.-led Terminal High-Altitude Air Defense system shook the country, the leadership of the military remained mum. They acted lukewarmly when young soldiers were killed during the Cheonan’s sinking and Yeonpyeong Island shelling seven years ago. They actually hesitated to counter the North’s attacks, showing concerns that it could escalate into a war.

The military is responsible for defending the western maritime border, but it welcomed the joint fishing zone issue becoming an agenda during an inter-Korean summit by calling it a “great plan to keep peace.”

When we ask why we have so few generals with strong convictions, military officials say such people all failed to get promotions.
As soon as he arrived in Korea, Mattis visited American soldiers at the Korea-U.S. Combined Forces Command in Yongsan. For a long time, the U.S. Forces Korea used the combat slogan of “Fight Tonight.” It means they are ready to right anytime. This is something the Korean troops must have, as we are the only divided country in the world and are still living in an armistice.

Mattis reportedly has a special affection for Korea. Whenever he visits, Mattis purchases a traditional wooden doll from Insa-dong. He may not have had time this trip, because arguments are being made in Washington that a preemptive strike on the North is possible. We wonder what our leaders are thinking about this situation. We also want to ask them, “Can we fight tonight? And win?”


*The author is head of the Unification Research Institute at JoongAng Ilbo and a unification specialist for the paper.