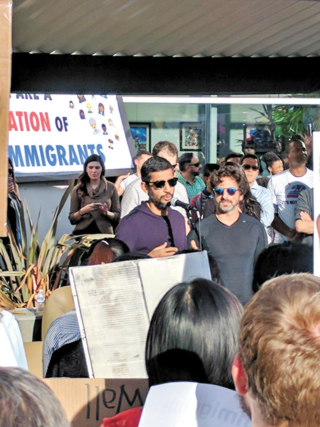 We’ve all expected this, but U.S. President Donald Trump’s actions are reckless. Withdrawal from the Trans-Pacific Partnership, building a wall along the border with Mexico, banning entries of people from seven countries and firing the acting Attorney General for opposing him … People are growing concerned what controversial move he will make next.

The Democratic Party and the American people resisted his extreme ideas before the election. But lately, companies are expressing their concerns. Major American companies have proclaimed that they oppose Trump’s ban on immigrants and refugees. Google CEO Sundar Pichai said he was “upset about the impact of this order” and promised to donate $4 million to refugee causes. Starbucks CEO Howard Schultz said “the civility and human rights we have all taken for granted for so long are under attack,” and the company would hire 10,000 refugees over five years. CEOs of Apple, Microsoft, Facebook, Goldman Sachs, Amazon, Uber and other major companies openly expressed their opposition.

These CEOs publicly say what they find to be wrong even before the most powerful man alive. It would be hard for Korean businessmen to understand. Koreans have all witnessed how cowardly they are during the investigation into Choi Soon-sil’s playing influence over the Park Geun-hye administration. Fifty-three companies gave 77.4 billion won ($67.5 million) to Mir and K-Sports foundations. Samsung Electronics Vice Chairman Lee Jae-yong said that he had to give money because President Park got angry for not sponsoring horseback riding when they met privately. LG Chairman Ku Bon-moo said, “It is the reality that companies have to follow government policy.” GS Chairman Huh Chang-soo also said that it was hard to refuse the Blue House’s demand.

Kukje Group was dismantled overnight when it didn’t do as the government pleased in the past. Samsung chairman Lee Kun-hee had been in hot water when he said, “Korean companies are second-class, bureaucrats are third-class and politicians are fourth-class.”

Nevertheless, it is pathetic that the tycoons, who are so unapproachable and escorted by guards all the time, gave money not to cross the president. American companies’ calculation is actually more reasonable. How can the president argue when they say Trump’s policy negatively affects performance, harms the employees and goes against the values of the consumers who like the products and services that the company sells?

It is encouraging that Samsung and LG are leading the American home appliances market, beating Whirlpool. Now, major Korean companies should have the values and convictions that suit the quality of their products and global market share. As we go through the Choi Soon-sil scandal, it is about time we have such unwavering companies and CEOs.