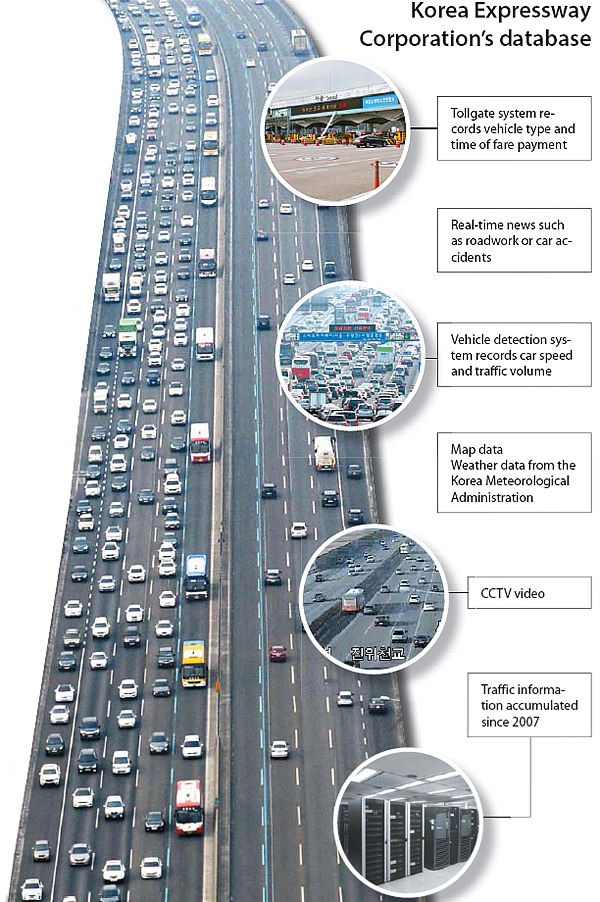 Traffic in Korea is notoriously horrid in the days leading up to Lunar New Year, when millions of Koreans hit the road to visit family and ancestral homes, but if it’s any consolation for the drivers stuck in hours-long traffic, forecasters are getting better at predicting conditions on the road, thanks to big data.

“A 6-hour, 20-minute drive is expected from Seoul to Gwangju,” traffic forecaster Kim Soo-hee at the Korea Expressway Corporation, which runs the nation’s toll roads, reported on Jan. 26, just a day before the holiday. His prediction was close to the actual time it took that day: 6 hours and 30 minutes, an accuracy of 97 percent.

“Expect to drive five hours from Busan to Seoul,” said another forecaster Park Ji-hyun on Jan. 28, in the midst of the four-day holiday. Park’s prediction was 95.7 percent accurate; drivers ended up spending 4 hours and 47 minutes in traffic.

The Korea Expressway Corporation publishes live traffic information on its website, roadplus.co.kr, but what’s most impressive is how far in advance it can forecast road conditions. Maps and graphs displaying traffic predictions on the nation’s highways during Lunar New Year were already up by mid-January, weeks before the holiday began. Maps with roads colored in green, yellow and red displayed congestion level by the hour. A bar graph showed expected driving hours between major cities like Seoul and Busan by taking into account the average time it took for cars to reach each tollgate. 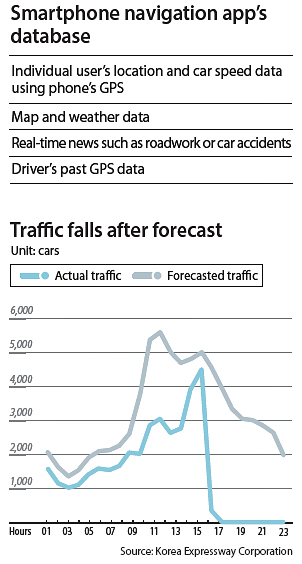 With the bevy of navigation apps and traffic condition reports available to drivers, many may take these forecasts for granted. But it was only less than 10 years ago that the idea of traffic forecasting came into being, a science that was made possible through improvements in big data analysis.

“After the chaotic congestion during the Chuseok [Mid-Autumn Festival] holiday in 2007, we started building up a system to support traffic forecasts and began the service in 2008,” said Namkoong Seong, director of transport research at the Korea Expressway Corporation and the first traffic forecaster in Korea. “What drivers want to know is not traffic information of the past or even right now. They want to know about future traffic situations they will actually find themselves in.”

Before 2008, the corporation delivered only real-time traffic data. For example, it could only say how many hours it took for a car that already arrived in Busan to get from Seoul.

Now, the corporation is able to make predictions. It collects data from over 300 tollgates, which record the type of car and time of passage through each gate. Vehicle detection systems, which measure car speed and traffic levels, have been installed every 1 to 2 kilometers (0.6 to 1.2 miles), covering roughly 4,000 kilometers. All this information is sent to the corporation’s traffic information center and research institute for analysis.

Every day, about 200 million pieces of data - that’s 20 gigabytes of information - flows through the traffic tracker’s computers. The corporation has been accumulating the data since 2007 and keeps it all in a database. The predictions combine big data collected from the past and real-time traffic data from 5,760 closed-circuit televisions set up on highways as well as weather forecasts from the Korea Meteorological Administration.

The Korea Expressway Corporation warns that the core purpose of the predictions is not to give a “perfectly accurate forecast” of the traffic situation. In fact, the corporation says it aims to be inaccurate. Its role, first and foremost, is to predict possible traffic conditions then suggest drivers move to other routes, hoping the congestion does not actually take place. If the traffic reports fulfill their intended goal, they will, ironically, be wrong. 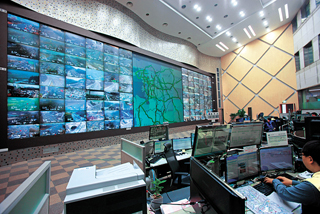 At the traffic monitoring room next to the Seoul tollgate on the Gyeongbu Expressway, all CCTV footage of traffic from 5,670 cameras across the nation’s highways are available. [KOREA EXPRESSWAY CORPORATION]

“We have to choose the level of expression by closely monitoring traffic condition changes,” Namkoong said. “The difficult part of forecasting is delivering information knowing that two or three out of 10 listeners will change their minds.”

The Korea Expressway Corporation, a state-run entity, is somewhat unique in offering predictions. Most private companies are still devoted to delivering real-time data through navigation apps. But some are getting into forecasting.

One of the most popular apps is T Map, operated by SK Telecom, which bases its traffic information on big data accumulated over 15 years. It generates road forecasts based on past highway usage rates. During busy holidays like Lunar New Year and Chuseok, the app combines traffic data with patterns by day of the week and weather forecasts to provide more precise predictions.

The real competitive edge of T Map, though, lies in the users themselves. When a driver starts the app, the phone sends the car’s location and speed to SK Telecom’s computers. The information serves a similar function as data from the Korea Expressway Corporation’s vehicle detection systems. The more users open up T Map, the more accurate the service becomes. According to the company, an average 2.64 million people use T Map every day.

But while these services might be offering ever more accurate predictions, they are only just that: predictions. After all, planning which roads to take and when to leave are still decisions left to the driver.