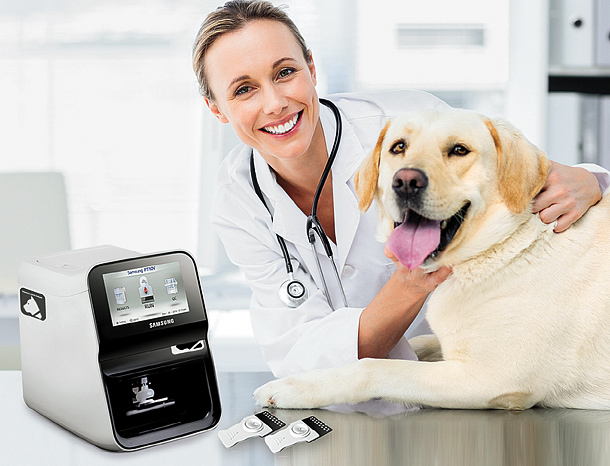 Samsung Electronics is entering the U.S. pet market, the largest in the world, with a medical diagnosis device that analyzes blood. [SAMSUNG ELECTRONICS]

Samsung Electronics is entering the U.S. pet market with a diagnostic device that will be distributed by Henry Schein, a major American supplier of health care products.

The Korean tech giant said Tuesday that it introduced a point-of-care blood analyzer, tentatively called PT10V, at the North American Veterinary Community Conference in Orlando, Florida, this week. The conference selected the device as one of five must-see products among new items being showcased by around 700 companies.

The blood analyzer is able to test up to 13 parameters at once, including liver and kidney profiles as well as metabolic disorders, and deliver the results in 10 minutes. The results are then sent to a mobile app where veterinarians can analyze them.

The PT10V is one-third the size of similar competing devices and boasts a faster diagnosis time and simpler procedure. It requires just one drop of blood, a revolutionary feature given existing pet diagnosis devices require a large amount of blood samples.

“Of the hundreds of samples evaluated during the study, no operative or functional errors occurred, showing consistent and reliable results,” said Dr. Andrew Loar, director of Stat Veterinary Lab under Ethos, a veterinary medicine company.

The U.S. pet market is the largest in the world, estimated at $63 billion in 2016, according to the American Pet Product Association, with dogs being the most popular pet. The biggest spending was made on food at $24 billion, followed by veterinarian care at $16 billion.

Henry Schein will be the local distributor for Samsung’s device. The New York-based company, named after its founder, is the world’s top provider of health care products and services to dental, veterinarian and medical clinics.

“This partnership demonstrates Henry Schein’s role as a total solutions provider for veterinarians and as a valued partner for the world’s most innovative companies,” said Peter McCarthy, president of the global animal health group at Henry Schein.

Samsung plans to expand its line of diagnostic devices and develop veterinary products for imaging devices like ultrasound systems to establish a total solution for the pet health market, which is seen to post sustainable growth.

The company, best known for its smartphones, has also been developing diagnostic devices for humans. It showcased a high-end mobile digital radiography system authorized for use in the United States at the Radiological Society of North America’s general meeting last November.