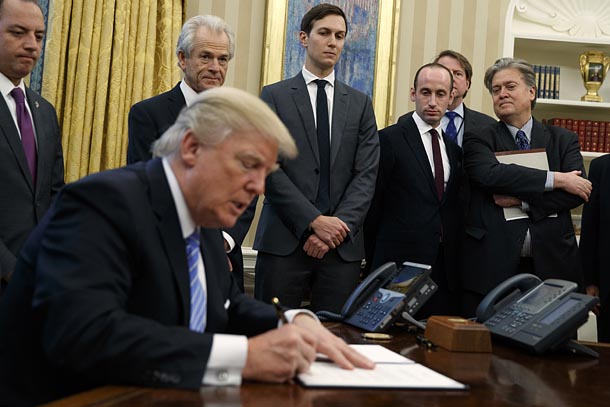 U.S. President Donald Trump cuts to the quick when starting a war on the currency front. China and Japan “played the money market and the devaluation market, and we sit there like a bunch of dummies,” he proclaimed. Ignoring orthodox norms and diplomatic practices, Trump debunked the fiction that foreign exchange rates are determined by the market.

A hawkish president usually uses a dovish figurehead for balance. But Trump named the architect of his protectionist trade agenda, Peter Navarro, to head the new White House National Trade Council in charge of directing America’ trade and industrial policy.

The economist is a vocal critic of China to the point of being xenophobic. The titles of some of his books underscore his thoughts: “Death by China: Confronting the Dragon — A Global Call to Action”, “Crouching Tiger: What China’s Militarism Means for the World,” and “The Coming of China Wars: Where They will be Fought, How They can be Won.”

In his 2011 book, Navarro portrayed China as a Dickensian society where ultra-lax health and safety standards “make brown lung, butchered limbs, and a dizzying array of cancers.” Eating Chinese food was simply “suicidal,” he wrote, because it is contaminated by “banned antibiotics, putrefying bacteria, heavy metals, and illegal pesticides.”

Claiming that China’s unfair trade practices and currency policy is killing other countries, Navarro makes a perfect pair with Trump, who accuses China of “raping” the U.S. While Trump bashes China and Japan, Navarro accuses Germany of using a “grossly undervalued” euro to “exploit” the United States and the rest of the European Union.

The winner takes all in a currency war. If a war over commodities and services is a conventional war, a currency war is more like a nuclear war. It can be merciless and leave lasting scars on the defeated. The global economic order can change according to the outcome. The U.S. triumphed in the two currency wars that ended in the Bretton Woods accord and the Plaza Agreement. The British pound had to surrender reserve currency rank and Japan endured two lost decades. This is why Chinese, German and Japanese leaders like Xi Jinping, Angela Merkel and Shinzo Abe are vehemently fighting back.

Xi poses as a czar of free trade and market forces. “Pursuing protectionism is like locking oneself in a dark room,” he warned in a speech on the opening day of the World Economic Forum in Davos, Switzerland, last month. Xi made it clear that China won’t withdraw from a hard fight. In a reversal of fending off further economic slowing, the People’s Bank of China last week raised short-term interest rates by 10 basis points — its first hike in three years. Monetary tightening could hurt growth — but will defend the yuan. Once a currency war begins, people could dump the yuan to buy dollars. Xi was tightening the safety belt for China.

Abe chose a business method Trump would like. He was flying to Washington for a summit with a generous package with pledges from Japanese companies to invest $450 billion in the U.S. over the next 10 years and create 700,000 jobs.

Korea would be most hurt by a global currency war. Another currency crisis could occur and wreck the national coffers. But our command center is empty. The government is at a standstill. Politicians are engrossed with the impeachment trial and next presidential election.

The currency stands for the economy and national political capacity at home and abroad. A low won helps exporters, but makes individuals poorer. Maintaining equilibrium in the exchange rate is a must for domestic stability and defense of national interests. No presidential hopefuls seem to be interested in the currency. They promise a better economy, but do not say how. Our presidential candidates must state what a reasonable exchange rate is for the Korean won and policy to defend it against Trump’s war.