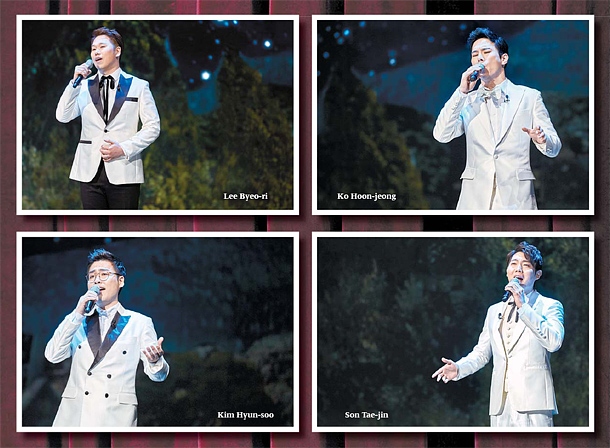 Korea’s music industry, which has been dominated by either idol stars or pop singers, seems ready to embrace musicians of different genres, including classical music. This trend can be seen through the success of the JTBC audition show “Phantom Singer,” which aimed to present crossover music, garnered much attention.

The show, which ended late last month, had classically-trained vocalists, as well as musical performers and even untrained musicians compete with one another to win a chance to be a part of a quartet that will work and perform as a group for a year.

Despite initial worries about the program’s potential success, the show became sensational. The high quality performances of people who seemed to be laymen excited audiences and the show put many of the no-name musicians on the map.

The show attracted both the general public and classical music fans to gather in front of TV screens. The performances of some songs like “Grade Amore” soared to No. 1 on the classical music charts, and “Il Libro Dell’amore” has become the first crossover song to be ranked 4th place on Mnet’s main music chart. 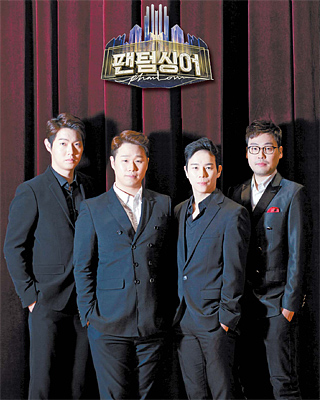 In fact, Koreans were quite familiar with classical vocal music in the 1970s to 1980s, as many of the famous singers such as Eom Jeong-haeng and Yim Ung-kyun appeared on TV shows often and sung Korean folk songs.

“Korean vocal singers back in the day used folk songs to relate to the public, but the disappearance of this kind of semi-classical music has separated vocal music from the public,” said Son Su-yeon, an opera critic. “However, with this [show, I] saw the possibility of such genre booming again.”

Son also thinks that the show has signaled that Korea’s music scene, currently dominated by idol stars’ performance, will diversify.

Another opera critic Lee Yong-suk said that the program had helped people become more intrigued in the classical music genre, not only in crossover music.

“There are more people who want to learn about opera,” Lee said.

Porte di Quatro, a group made up of Go Hoon-jeong, Kim Hyun-su, Son Tae-jin and Lee Byeo-ri, were named the winners of the show’s first season. The team will stay together for a year to perform concerts and will release an album together. The JoongAng Sunday S Magazine met with all four members to hear about their goals and what they would like to achieve with their new found fame.

For one performance, Kim and Son sang a duet of the song “Growing” by singer K.Will and received first place out of all competitors. The win led many to project that they could both be winners of the show. However, they were separated after their song “In the Dream” by singer Lena Park was ranked 5th place, and Kim was even in danger of being pushed out of the race.

“That was the most difficult part during the audition,” said Kim.

“I practiced much harder after winning first place, and I thought I didn’t make mistakes, but the response was not good.”

Son said singing a Korean song put a hurdle in front of Kim as so many already know the ins and outs of the song and have developed their own prejudice of how the song should be sung.

“On the other hand, people focused more on the music itself when singers sung Italian songs as they don’t understand the Italian lyrics,” said Son.

The songs sung in the final rounds were mostly Italian songs, and many struggled with song selection as too many Italian songs had already been presented in the show. The program not only left the decision of who to work with up to participants, but also imposed the burden of continuously finding a new repertoire to do.

“Many of the Korean songs needed to be rearranged, and more new songs need to be released,” said Kim adding that he often tells his composer friends they should work on more songs.

“I think many producers have been thinking about making new songs that could entertain the public, and I really hope more songs for four people come out.”

Son expects that the show may have opened the door for many musicians who have wanted to try something new.

“Now people will think more fondly of the songs that they did not enjoy or understand before and now even more [composers] can get a chance to shine.”

The market at the moment is very small for classical vocalists who live off of an applause at the end of their performances. As the winners of the first edition of the show, they say they feel responsible to make new opportunities where the supply of vocalists is more than the demand.

“The dream is, I want to play a role like YG Entertainment [does in the idol scene,]” said Kim adding that the music he does targets to move people of all ages.

“‘Phantom Singer’ had ignited the fire of possibility for the crossover genre, and now the winner of the show needs to build a foundation for the next generation of musicians.”

They feel that they have limited time to make something work before the tide changes.

“Our popularity might be something that will fade, but the songs are different and won’t fade,” Son said. “We think much about what to do in the next year so that we can find something that could last a decade.”

Go, the oldest out of the four winners, showed leadership on each team he was in. He received a good review from singing “Danny Boy” and had steady performances. Meanwhile, Lee, the youngest out of four, had more ups and downs. He said he didn’t even dream about winning and he finally felt a bit relieved after singing with the group in the final round. Go tried to help Lee bring out his best self after seeing him struggling on stage, and Lee said Go’s coaching helped him find peace on stage and even his posture became much more natural.

While Kim and Son shared their classical music background and work in the crossover genre, Go and Lee share their background in musicals. Go debuted in the musical “Spring Awakening” in 2009 when he was a senior studying to be a classical vocalist at Kyunghee University and has been working in the industry since.

“I didn’t think being a classical vocalist was my thing so I jumped into the world of musical theater, but felt like I was lacking in acting and dancing,” said Go.

“I left the stage for over two years and learn everything from composing to mixing music, and the time away was surprisingly helpful.”

While Go has been educated to do music, Lee was never studied music in school. He studied religious studies and even went as a missionary to the Philippines for a year, but couldn’t give up his passion for music. He had set his mind on taking a challenge, but he was always rejected whenever he auditioned for musicals or operas.

The two agree that the show had opened an outlet for those who have been avid fans for music genres that are less popular.

Just like Kim and Son, Go and Lee also hope their work in the coming year not only expands their own views of music, but also helps the crossover music market in Korea.

“The charm of music done by a quartet is not only that the listeners but also the performers feel that thrill when four different voices make beautiful harmony and resonate,” said Lee.

Go said the group of four might even attempt to perform their own songs on their album, instead of just singing covers of songs that have already been sung by many others.

“There were many Italian songs sung during the audition, but I think it’s time for more classical music written in Korean to come out,” said Go.