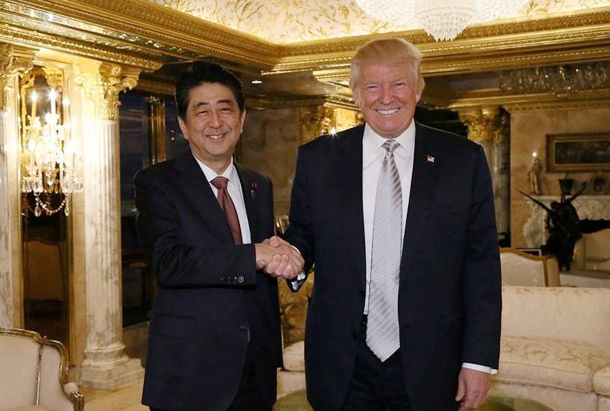 Whenever there is trade friction between Japan and the United States, Japan often uses the phrase gaiatsu. Literally, it means foreign pressure, but it refers to the United States’ “Japan-bashing” because of trade imbalance, Japan’s regulation or a low yen trend. It is different from mere pressure. The United States has been exerting gaiatsu to change adverse trade conditions or Japan’s passive attitude.

Japan used it to persuade domestic interest groups and sought to change its direction through deregulation.

Gaiatsu symbolizes a unique cartel between the United States and Japan, epitomizing the wisdom of controlling discords without hurting the foundation of alliance.

It doesn’t mean that there was no resistance in Japan. In 1989, at the height of trade dispute with the United States, nationalist Shintaro Ishihara, former governor of Tokyo, and Akio Morita, former chairman of Sony, published a book titled “The Japan That Can Say No.”

In a recent interview with a magazine, he said that Tokyo should pursue a “Japan First” policy, referring to U.S. President Donald Trump’s America First. “It will work if you tell Trump, ‘When cowboys shoot at each other, they both get hurt.’”

Japanese Prime Minister Shinzo Abe’s response to Trump’s pressure on Japan is flexible. He is using the pressure as means to accomplish his security ambitions. As Trump demanded greater contribution in security expenses, he promised qualitative and quantitative reinforcement of Japan’s defense strength. He used ambiguous rhetoric while avoiding mentioning the cost when U.S. Secretary of Defense James Mattis visited Japan last week.

Without foreign pressure, it is not easy to discuss increased defense strength in Japan, where people are allergic to a war. Expanded defense capability would ultimately spur Abe’s “active pacifism.” Also, Washington can no longer blame Japan for a “free ride” in security.

The Abe government recently resumed the construction of a U.S. Marine airfield in Okinawa, despite fierce local protests.

In trade, cooperation between the government and businesses is noticeable. “Japan Inc.” seems to be reviving. Abe recently met with Akio Toyoda, Toyota Motor Corporation president, to prepare for the U.S.-Japan summit meeting.

Toyoda also said that politics and businesses should add strength to each other. The partnership business package that Abe is offering for Trump’s job creation drive is a collaboration between the government and private sector.

At the first summit meeting with Abe on Feb. 10, Trump may have discovered Japan Inc. Japan is united before foreign pressure. Korea can learn from Japan’s preparation for the summit, which is considered to be the most significant post-war meeting.