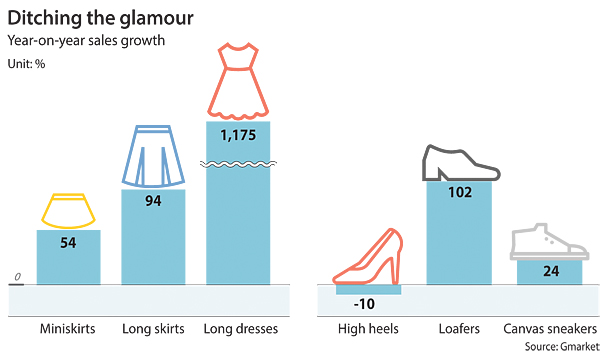 Miniskirts, high heels and red lipstick are typical “small luxury” items that have sold well during economic downturns - but not anymore.

Relatively cheap but flashy, they were once consolations for women consumers in difficult times. However, with the economy remaining sluggish since the 2008 global financial crisis, sales figures are showing that the usual trend is going in the opposite direction as women opt long skirts that reach the ankles, low-heeled loafers and natural-colored lipsticks.

Analysts believe that consumers who bought colorful and fancy “small luxuries” to relieve stress during the slow economy are now shifting to naturalness as the recession extends, showing few signs of improvement.

Between Jan. 9 and Feb. 8, sales for long skirts that extend beyond the knees rose 94 percent compared to the same period last year, when the growth rate for miniskirts was 54 percent. Compared to the previous month, long-skirt sales almost doubled to rise 94 percent while miniskirt sales fell 20 percent. Long dresses were a best-seller this winter, rising almost twelvefold year on year.

“Miniskirts and high heels were once deemed a source of self-esteem, therefore purchasing them was a good stress relief for women during economic crisis,” said Hwang Ji-eun, head of the fashion team at Gmarket. “But with the recent recession running unusually long, I think consumers nowadays are more into dressing comfortably.”

A growing tendency for naturalness can be also found in the trends for lipstick color. For a decade, the most popular lip color for the fall and winter was bright-red. But this year, manufacturers are increasingly releasing products that have color closer to the natural lip, such as brown-red or rose. The fastest selling color in Lancome’s new lipstick line last fall was the rose-colored Absolut Rouge 264. It sold out two weeks after release.

“Even during recessions, fashion and beauty consumption still goes on because it remains a relatively cheap realm for people to express themselves and in turn, this keeps the fashion and beauty trend evolving despite economic slowdowns,” said Lee Hee-sook, a professor of human ecology at Chungbuk National University.