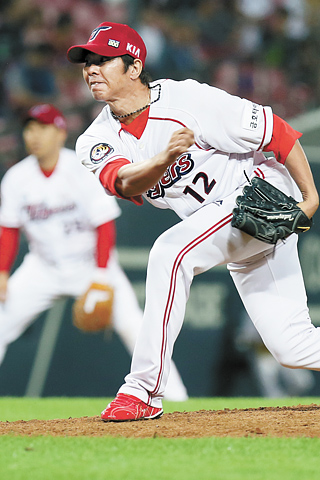 To Lim Chang-yong, 40, of the Kia Tigers, his appearance at the 2017 World Baseball Classic may be the last WBC event he plays as a pitcher, since the event is held every four years.

“My role on the team is to be a supporter,” Lim said. “I feel less pressured this time since the other pitchers have such good skills and ability.”

But although he is the oldest player, he does the same amount of training as everyone else and tries his best to keep up with the junior pitchers.

“I’m thankful for the opportunity given by the head coach,” Lim said at the Gushikawa baseball stadium in Okinawa, Japan on Monday. “My physical condition is good. Since I’m older, it takes time for me to be at my best, so I’m slowly getting there.”

With his addition to the national team, Lim replaced Jin Gab-yong of the Samsung Lions’ record of being the oldest member on the team. Jin participated at the WBC representing Korea at the age of 39 in 2013.

As Lim got included in the WBC final entry, he surpassed Jin’s record and became the first baseball player in his 40s to be a member of the national team.

“We would have to look into the record again, but I don’t remember any national team members in their 40s,” said the Korea Baseball Organization (KBO) associate.

“Age is only a number,” Lim said after he heard about the record.

In fact, a number of players in the KBO such as Lim, Lee Seung-yuop of the Samsung Lions and Lee Ho-joon of the NC Dinos are showing outstanding performance on the mound. Lim said he will retire when he can no longer throw fastballs.

Lim’s most recent appearance at the WBC event was in 2009 when he helped the team advance to the final as a relief pitcher.

However, he was left with a sense of frustration in the tenth inning of the final round as he allowed a winning run to Suzuki Ichiro, outfielder for the Miami Marlins of the Major League Baseball (MLB), when they were tied 3-3.

“I have a lot of good memories at the WBC, but there was this one time that I regret,” Lim said.

“I want to shake off all regrets and be able to help the team at the WBC with the junior players through good pitching.”