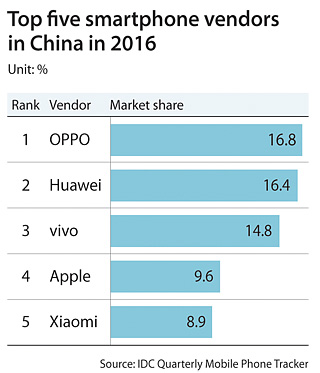 Chinese phone makers, who started off at the lowest end of the market, are eyeing the high-end dominated by Apple and Samsung.

According to a report from the Korea Trade-Investment Promotion Agency (Kotra) on Thursday, the average price of Chinese phones almost doubled from between 1,500 yuan ($219) to 2,000 yuan in 2015 to roughly 3,000 yuan in the second half of last year.

“In the past, China’s high-end phone market was dominated by Apple and Samsung, while Chinese phones were strong in the mid-to-low price segment,” said Lee Youn-sik, manager of Kotra’s trade center in Shanghai.

“However, Chinese companies have recently shifted their strategy upmarket and are releasing phones even costlier than Apple.”

Chinese manufacturer Gionee recently released its M2017 smartphone in a special edition that comes in Italian alligator skin. Its selling price: 16,999 yuan. A leather version of the same model sells for 6,999 yuan.

Considering that Gionee has been a big player in the cheap phone market, known for selling phones for less than 1,000 yuan, its new model clearly shows higher aspirations.

Until last year, according to Chinese mobile market tracker Telworld, Apple held a dominant share in the high-end market with phones priced over 4,000 yuan, followed by Samsung and Huawei.

“More Chinese manufacturers are finding it difficulty to play by their old strategy of selling more products at low margin as the market matures,” Kotra said in report.

“More Chinese brands such as Huawei, OPPO and vivo will strengthen their brand power in the mid-to-high end market,” Kotra’s Lee said. “This will put further pressure on Apple and Samsung.”

According to market tracker IDC, four out of the five top players in China were local manufacturers last year.

Last year was the first time ever that Apple saw a year on year decline in the Chinese market, IDC noted.