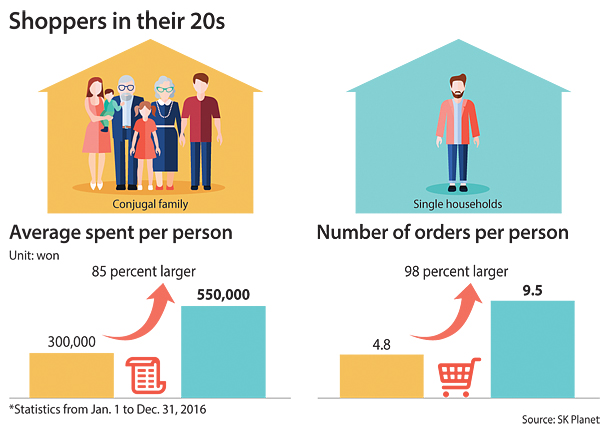 As the number of single-person households rises, their consumer power is demonstrated on a number of e-commerce sites as well. This is prompting online platforms to actively hold sales to attract this particular lifestyle group.

Single-person households accounted for 27.2 percent of entire households in Korea in 2015--the latest government data available. This was a 25 percent jump from 2010 and Statistics Korea predicted that, at this rate, it will reach 30 percent by 2020.

Since most single adults work during the day and do not have regular family outings to discount chains or department stores, e-commerce is a convenient way for them to purchase daily necessities and even food or small furniture.

Their presence online is already demonstrated in sales: Approximately 30 percent of all shoppers at the e-commerce site 11st last year were single-person households. 11st’s operator SK Planet counted users that follow a specific purchase pattern frequently found among people who live alone, in terms of items purchased and amount spent.

The research also revealed that, among people in their 20s, those who live alone purchased much more from the online shopping platform than those living with families. Consumers in their 20s living alone spent an average of 550,000 won a year, or 85 percent more than the 300,000 won spent by 20somethings who lived with their families. While the former placed an average of 9.5 orders, the latter made 4.8 orders per year.

“Our interpretation was that more middle-aged people are living apart from their families due to various reasons such as in the case of commuter couples or kirogi (meaning goose in Korean) fathers whose children and wife live abroad for education purposes,” said an SK Planet spokesman.

Whether it’s food or furniture, the shopping preference of single households resonate toward “the smaller, the better.” But this does not mean they skip on quality. “Single households prefer easy-to-use and smaller products, but they have a tendency of not hesitating for purchase on realms they think is necessary or valuable to them,” said Park Jun-young, a manager at SK Planet.

To cater to such needs, e-commerce sites are suggesting products that fall well in line with the lifestyle of single-person households.

11st launched a sale Monday on more than 60 items including food, furniture, kitchen goods and home electronics for single households at discounts of up to 53 percent. The list includes instant rice, plate and kitchen wear sets for one, mini laundry machines and even small air fryers. The sale will run through March 5.

Lotte.com, another e-commerce site, adapted the single household trend to its major furniture and beddings sale. This year’s list of discounted products included furniture made for smaller, single-person homes. The best-sellers include a huge cushion that can be used as both a sofa and a bed and a small side table. Between August and February, sales of both items rose 175 percent and 160 percent compared to the previous six months. Through March 19, Lotte.com will provide a discount of up to 10 percent and will grant additional Lotte points for consumers who purchase from the line-up.

Rival Gmarket launched a sale of home necessities, mainly organized of cleaning products such as mini vacuum cleaners or robot cleaners that dust and sweep on their own. The Illobot 2 robot vaccum cleaner is currently selling gor 21 percent off at 69,000 won from the original 88,000 won. Discounted products bought through Sunday will be shipped without a delivery charge.