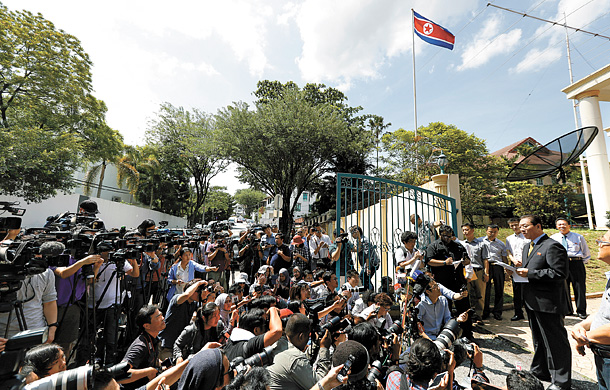 North Korea’s Ambassador to Malaysia Kang Chol, far right, speaks to media outside the North Korean Embassy in Kuala Lumpur on Monday after Malaysia recalled its ambassador to North Korea amid rising tensions between the nations. [AP/YONHAP]

Four North Korean suspects in the assassination of North Korean leader Kim Jong-un’s half brother Kim Jong-nam appear to be back in Pyongyang, according to Malaysian media reports Monday.

Citing unnamed sources, reports indicate that the four men flew from Kuala Lumpur International Airport shortly after the Feb. 13 killing for the Indonesian capital of Jakarta. They then reportedly flew to Dubai in the United Arab Emirates and to Vladivostok, Russia, before landing in the North Korean capital.

Sources told The Star, a Malaysian newspaper, “They may have taken the long route to shake off the authorities.”

In the first press conference organized by Malaysian police since Kim Jong-nam was killed at the airport in Malaysia’s capital, Tan Sri Noor Rashid Ibrahim, deputy inspector general of the Malaysian police, said Sunday that four more North Korean men were wanted and that Malaysian authorities were cooperating with Interpol to track them down.

Police said they were also searching for three other people, including one North Korean man named Ri Ji-u. The two others are also suspected to be North Korean.

South Korea’s Ministry of Unification, which handles inter-Korean relations, said Monday it couldn’t confirm the report. Asked whether the South detected any signs of change within the North that could relate to the assassination of Kim Jong-un’s half brother, spokesman Jeong Joon-hee said, “No.”

North Korean Ambassador to Malaysia Kang Chol was summoned by the Malaysian Ministry of Foreign Affairs Monday to be scolded for a statement he made last Friday night outside the Hospital Kuala Lumpur mortuary, where the body of Kim Jong-nam remains. He accused Malaysia of “trying to conceal something” and “colluding and playing into the gallery of external forces” to “besmirch the image” of North Korea by politicizing the incident.

At one point, Ambassador Kang threatened to sue the Malaysian government in international court.

The envoy said North Korea would not accept Malaysia’s post-mortem results, which haven’t been revealed yet, because the process had been forced over the embassy’s protest. He also expressed frustration with Malaysian authorities for refusing to hand over Kim Jong-nam’s corpse. Malaysia is waiting for family members to claim the body.

In an official statement issued Monday, reportedly while North Korea’s top envoy was still talking with Malaysian authorities after he was summoned, Malaysia’s Foreign Ministry said Kang’s accusations were “baseless” and that it took “very seriously any unfounded attempt to tarnish its reputation.”

Malaysia’s ambassador to Pyongyang was recalled to Kuala Lumpur for consultations, the ministry said.

“The Malaysian government has been transparent,” said the ministry. “The [North Korean] Embassy has been kept informed of developments related to the matter as well as the processes involved under Malaysian law.”

Talking to reporters outside the North Korean Embassy shortly after he left the ministry, Kang urged that North Korea should be involved in the ongoing investigation, claiming Pyongyang “cannot trust the investigation by the Malaysian police,” according to The New Straits Times, a news outlet in Malaysia.

An autopsy on Kim Jong-nam was completed last Wednesday at Hospital Kuala Lumpur but according to Deputy Inspector General Noor Rashid, doctors have yet to pass the results on to police. It is disputed whether he was killed by injection or through an infused cloth held to his face. Malaysian health authorities said they might make an announcement as early as Wednesday.

A grainy video purportedly showing CCTV footage of Kim Jong-nam’s assassination was released by Fuji TV Monday. It shows a woman wearing a white top lunging at a man in a light blue jacket from behind. The Japanese broadcaster claimed the man was Kim Jong-nam.

Another woman was seen approaching Kim from the opposite direction at the time of the alleged attack, but it was unclear what action she was performing.

The check-in area of the airport’s departure hall looked fairly crowded with other people but no one was seen approaching Kim or the two women during or after the attack.

Both women quickly walked away in the directions they came from, after which Kim headed to an information desk and sought help from two people there. As Kim was led to two police officers, he pantomimed something being put over his face as if to explain what had happened. The clip ends with him walking to an airport clinic.

Malaysian police said he died on his way to a nearby hospital.

Four people have been arrested so far in the probe, including a 27-year-old Vietnamese woman, a 26-year-old Malaysian man and a 25-year-old Indonesian woman. The latest suspect to be held in police custody is a 47-year-old North Korean man named Ri Jong-chol, who arrived in Malaysia on Aug. 6 and had been working for an IT company in Kuala Lumpur.

In an exclusive interview with the JoongAng Ilbo, an affiliate of the Korea JoongAng Daily, Won Jeong-hwa, a former North Korean spy who entered South Korea in 2001 posing as a defector, said there was a high chance Pyongyang hired foreign females in order to hide the regime’s involvement.

“The key to assassination is speed,” said Won, 43, who served a five-year sentence in South Korea after being convicted of spying for the North.

“Women are faster, and it’s easier for them to approach men,” she said. “For Kim Jong-nam, it’s plausible that [North Korea] paid [the foreign agents] about a million dollars in advance.”

As to why they decided to kill him in a crowded airport, Won, who had been ordered to kill Hwang Jang-yop, a former senior politician in Pyongyang who defected to the South in 1997, said she would’ve done the same.

“People are in awe that [Kim Jong-nam was killed] in an airport saturated with CCTVs, but CCTVs are everywhere these days,” she said. “Airports are crowded, and they have so many escape routes.”

Won brushed off media reports that cited the foreign suspects as saying they thought the assassination was a “prank” and didn’t intend to murder Kim Jong-nam.

“It’s impossible to pull it off without any training,” said Won. “When you’re in an airport with that many people, the slightest mistake would lead you to getting busted and failing to kill your target.”

As to why Ri Jong-chol, the fourth suspect to be arrested, was left behind in Malaysia unlike the four other North Korean suspects, Won said he may have been intentionally chosen by the regime to be set up for the crime, to be “cannon fodder.”

“They choose which agents get left behind,” said Won. The chosen ones “stay to create mayhem, buying time for the other agents to escape.”